The overall markets remain rather mixed so far. Rebound in US stocks overnight didn’t carry forward to Asian session. Nikkei is weighed down by poor Tankan survey data. Dollar’s rally attempt was somewhat knocked down by up trend resumption in Gold. Recovery in oil prices also dragged down the greenback and lifted Canadian. Focus will now turn to US ADP employment and ISM manufacturing, as well as tomorrow’s NFP. Hopefully, these data could trigger some meaningful breakouts in the markets. 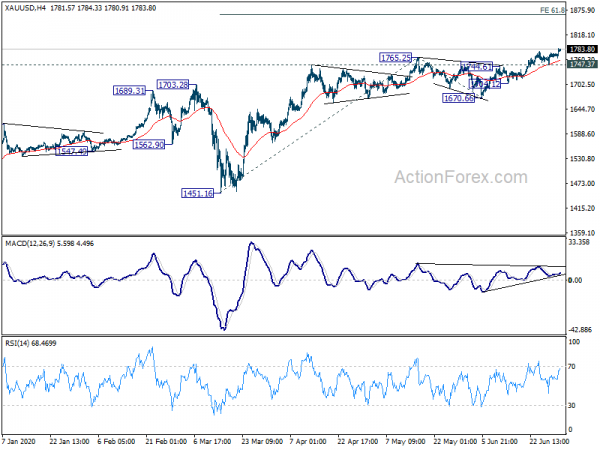 Japan PMI Manufacturing was finalized at 50.1 in June, up from May’s 38.4. Markit noted that firms still operate full capacity due to slow-moving order books. Export demand declines as coronavirus disruptions linger on. But business confidence rebounds into positive territory.

Joe Hayes, Economist at IHS Markit, said: “The chance of a V-shape recovery in the manufacturing sector appears slim at this stage, which opens up the possibility of a two-speed economy if the domestic-focused service sector shows more signs of activity.”

Australia AiG Performance of Manufacturing Index rose 9.9 pts to 51.5 in June, back into expansion region. AiG said that this only “indicates an improvement from the depths of April and May, rather than a recovery to buoyant conditions”. Also, “almost all of the improvement in June was concentrated in the large food and beverages sector”.

From New Zealand, building permits rose 35.6% mom in May.

China Caixin PMI Manufacturing rose to 51.2 in June, up from 50.7, beat expectation of 50.5. Markit said output expands again as sector continues to recover from the coronavirus crisis. Total new work increases for the first time since January, but external demand remains subdued.

Wang Zhe, Senior Economist at Caixin Insight Group said: “Around mid-June, the epidemic flared back up in some parts of China, but its impact on the overall economy was limited. The gauge for future output expectations continued to rise in June, reflecting manufacturers’ confidence that there would be a further relaxation of epidemic controls and a normalization of economic activities.”

GBP/JPY failed to break through 131.98 minor resistance despite recovery. Intraday bias remains neutral first and further fall is in favor. On the downside, break 131.68 will resume the decline from 139.73 for 129.27 support. Decisive break there will confirm completion of rebound from 123.94. Deeper fall would be seen to retest 123.94 low. Nevertheless, firm break of 133.98 will now indicate short term bottoming and turn bias back to the upside for 136.34 resistance first. 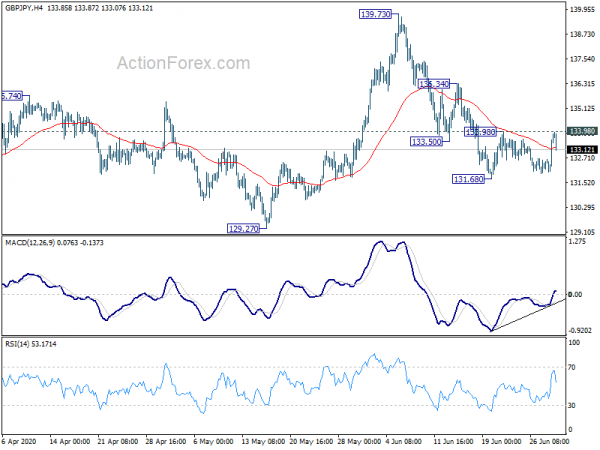 In the bigger picture, we’re seeing price actions from 122.75 (2016 low) as a sideway consolidation pattern. As long as 147.95 resistance holds, an eventual downside breakout remains in favor. However, firm break of 147.95 will raise the chance of long term bullish reversal. Focus will then be turned to 156.59 resistance for confirmation. 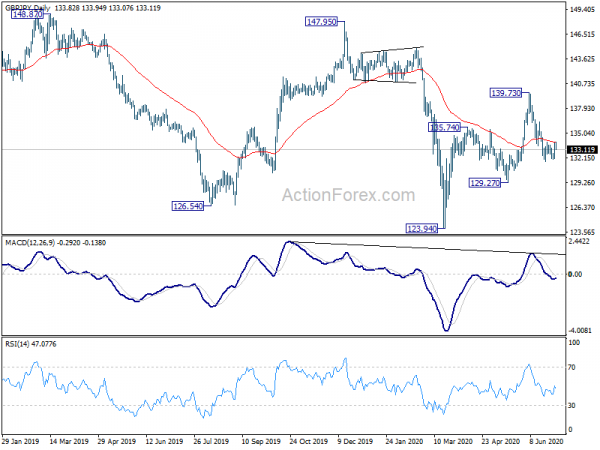