Risk markets turned mixed today as investors appear to be turning from optimism to cautiousness. Hong Kong stock suffered steep losses on escalating US-China tension. The selloff somewhat carries forward to European markets. Yet, US markets open with slight gains. In the currency markets, Euro is leading the way higher today, trying to catch up with Australian Dollar. Yen Sterling and Dollar are the worst performing so far. Gold is taking a breath for now, but it’s still on track to extend up trend to retest prior record high.

Technically, the selloff in Yen is a development to note. Even the weak USD/JPY rebounds strongly ahead of 106.63 near term support. Focus is back on 107.54 minor resistance and break will target 108.16 resistance next. EUR/JPY is now close to 124.43 high and break will resume larger rise from 114.42. GBP/JPY also recovers after some shallow retreat and break of 135.34 will resume near term rebound from 131.68 to 139.73 resistance. AUD/USD also followed the path of AUD/USD and break 76.78 short term top today, resuming the whole rise form 59.89 low. 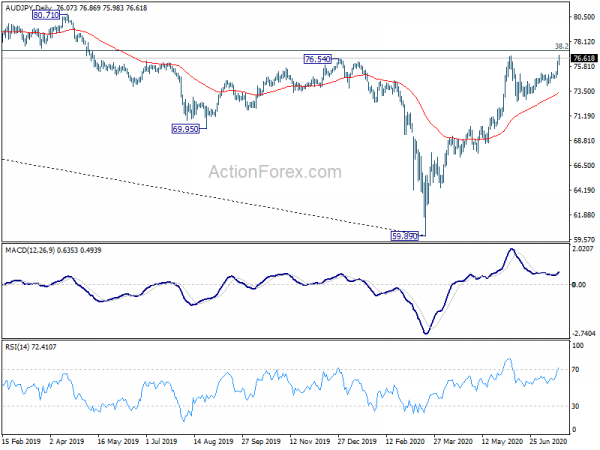 Some volatility is seen in USD/CNH today after the pair dips to as low as 6.9633 on broad based Dollar weakness, but recovers back above 7 handle quickly. Escalating US-China political tension is seen as a major factor driving the moves.

China’s foreign Ministry spokesman Wang Wenbin revealed that the US government gave China three days to close its consulate in Houston. Wang criticized that as “unprecedented escalation” and pledged to “react with firm counter measures if the US doesn’t “revoke this erroneous decision”. 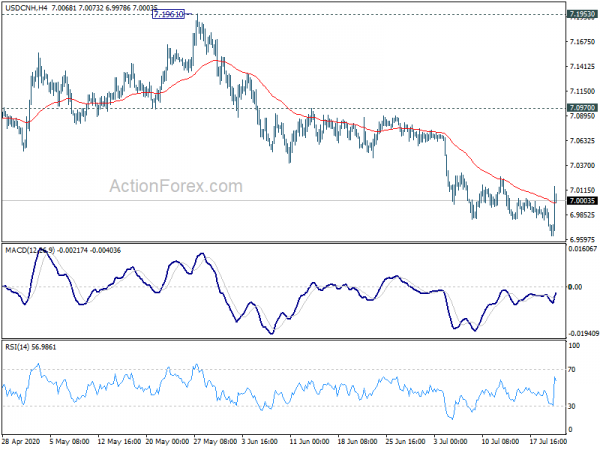 Canada CPI rose 0.8% mom in June, well above expectation of 0.4% mom. Annually, CPI turned positive to 0.7% yoy, up from May’s -0.4% yoy, and beat expectation of 0.3% yoy. That’s also the largest jump year-over-year CPI rate since March 2011. Prices rose in five of the eight major components on a year-over-year basis. Food and shelter prices contributed the most to the increase in the CPI. Prices for goods declined by less than the previous month on a year-over-year basis, including energy prices.

Japan’s Cabinet Office said in the new monthly report that the economy is still in a “severe situation” due to coronavirus. But “it is showing movements of picking up recently. On the positive side, private consumption is picking while exports are bottoming out. However, business investments is “in a weak tone”. Industrial production picked up in “some sectors” but it’s “decreasing as a whole”. Corporate profits are “decreasing sharply” while employment situation is “showing weakness”.

Concerning short-term projects, the government expected the economy to “show movements of picking up”. However, “attention should be given to the risk that domestic and overseas infections would affect economies”.

Japan PMI manufacturing rose to 42.6, any hopes of robust recovery need to be tempered

Bernard Aw, Principal Economist at IHS Markit, said: “The Japanese economy continued to struggle at the start of the third quarter, with latest flash PMI data indicating a further sharp contraction in business activity during July… Any hopes of a robust recovery need to be tempered as business sentiment about the year-ahead outlook remained pessimistic on balance”.

Preliminary data from Australia showed retail sales rose 2.4% mom in June, slowed from May’s 16.9% mom rise. Rises in Cafes, restaurants and takeaway food services exceeded 20% mom for the second consecutive month, but will remain -17% below the levels of June 2019, while Clothing, footwear and personal accessory retailing rose around 19% mom, remaining -6% below June 2019 levels.

There was also some evidence of stockpiling at the end of June too, most evident in Victoria, which is now back in lockdown as coronavirus cases rose to new high.

Australia Westpac Leading Index rose from -5.29 to -4.44 in June. Despite the modest improvement, the index growth rate remains in deep negative territory, “consistent with recession”. Westpac added, “overall, the component mix points to downside risks near term with the drivers behind the weak July readings on sentiment likely to impact on other, less timely, components that track real activity in coming months.”

Also, after yesterday’s announcement of extension to JobKeeper and JobSeeker packages, Westpac expected the government to inject around AUD 13.5B in December quarter. The stimulus was estimated to be at AUD 65B in June quarter and AUD 95B in September quarter. Thus, “the challenge for the economy…. is to adjust to such a sudden reduction in the size of government support”. 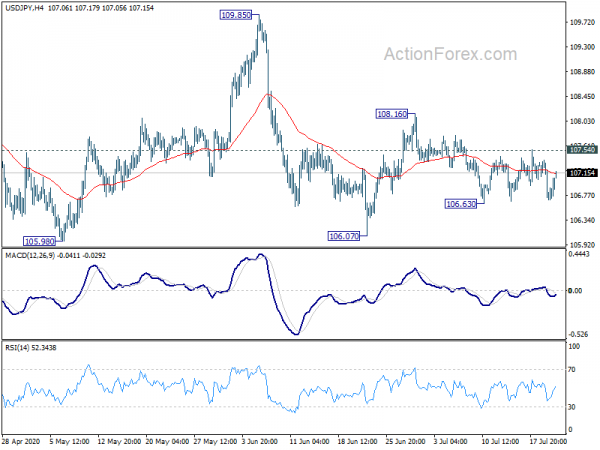 In the bigger picture, USD/JPY is still staying in long term falling channel that started back in 118.65 (Dec2016). Hence, there is no clear indication of trend reversal yet. The down trend could still extend through 101.18 low. However, sustained break of 112.22 should confirm completion of the down trend and turn outlook bullish for 118.65 and above. 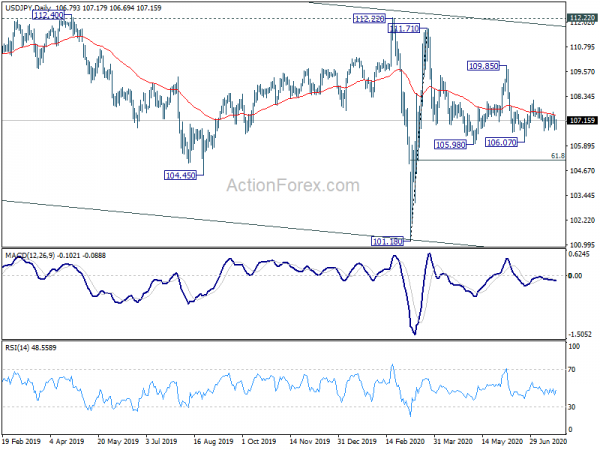