While US stocks tumbled overnight, Asian markets are just mixed. Gold and oil are stuck in range too, while the bigger move is found in bitcoin. The forex markets are also generally staying in tight range. Yen is currently the strongest one for the week, followed by New Zealand Dollar and Euro. But Australian Dollar is the worst, followed by Dollar and Sterling.

Technically, our focus will remain on when Dollar would breakout to the downside, and whether that could be accompanied by stronger rebound in Yen. Levels to watch include 1.2079 temporary top in EUR/USD and 0.9127 temporary low in USD/CHF. At the same time, 129.56 minor support in EUR/JPY will be watched to gauge Yen strength. More importantly, we’ll see if USD/JPY could rebound from 107.75 fibonacci support.

Bitcoin’s fall from 64828 accelerates lower today and breaches 50k handle. As noted in a previous post, a 5-wave terminal triangle has completed at the record high, which should mark a medium term top. We’re seeing the fall from there as correction to whole up trend from up trend from 4000 (Mar 2020). 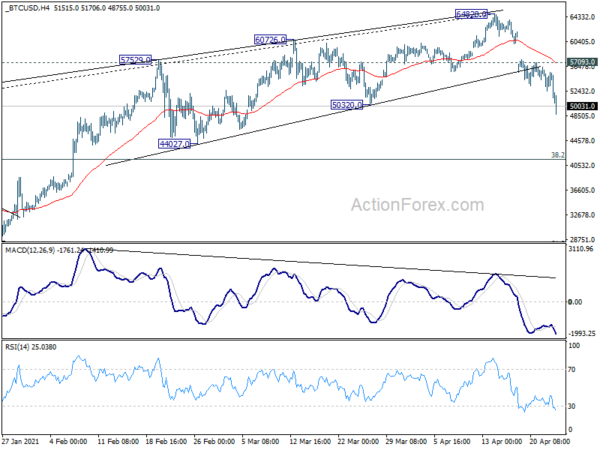 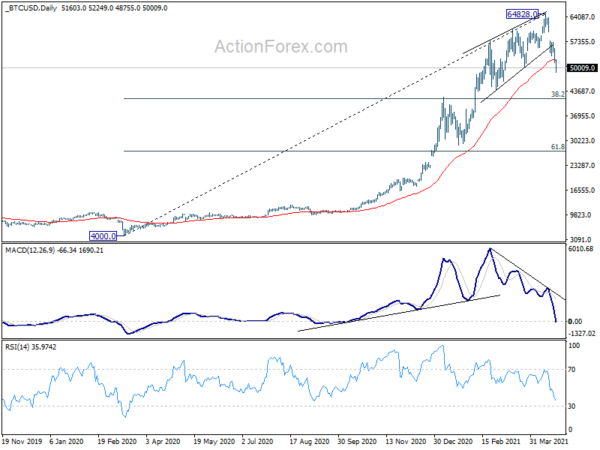 Japan CPI core (all-item less fresh food) improved to -0.1% yoy in March, up from -0.4% yoy, above expectation of -0.2% yoy. But that’s still the eight straight months of negative reading. Further fall in core inflation is expected due to drag from mobile phone fee cuts. All-item CPI rose to -0.2% yoy, up from -0.4% yoy. CPI core-core (all-item less fresh food and energy) also ticked up to 0.3% yoy from 0.2% yoy.

Separately, BoJ Governor Haruhiko Kuroda told reiterated to the parliament, “when Japan’s inflation approaches our target, we will deliberate an exit strategy at our policy-setting meeting including details such as the timing and means for selling ETFs.” But for now, inflation remains distant from target.

Usamah Bhatti, Economist at IHS Markit, said: “While some Japanese private sector businesses noted that a resurgence in COVID-19 cases could dampen prospects in the second quarter of the year, firms remained optimistic that overall business activity would improve in the coming 12 months. That said, there is concern the impact of the pandemic will be prolonged further.”

Pollyanna De Lima, Economics Associate Director at IHS Markit, said: “Australia’s private sector started the second quarter on a strong footing, with growth of output accelerating for the second time in a row to the steepest on record as sales were boosted by improved market confidence due to a reduction in the negative impact of COVID-19.

“The stronger growth momentum filtered through to the labour market… The overall degree of business sentiment improved from March’s seven-month low and was above its average… Ongoing supply-chain disruptions continued to exert upward pressure on inflation. The flash results highlighted the steepest increases in both input costs and selling charges since the inception of the survey.”

UK retail sales and PMIs will be released in European session. Eurozone will also release PMIs. US will release PMIs and new home sales. 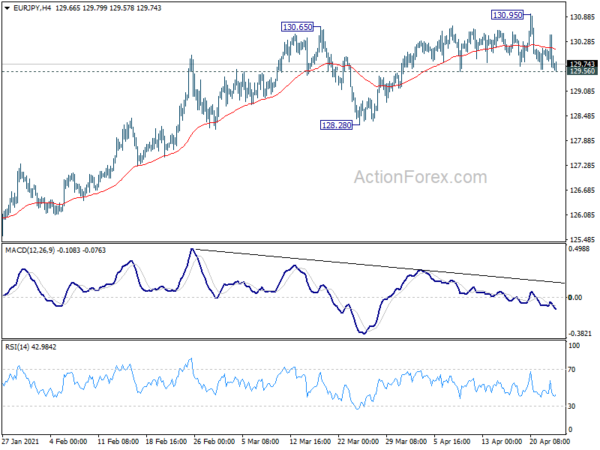 In the bigger picture, rise from 114.42 is seen as a medium term rising leg inside a long term sideway pattern. Further rise is expected as long as 127.07 resistance turned support holds. Next target is 137.49 (2018 high). Decisive break there will open up the possibility that it’s indeed resuming the up trend from 94.11 (2012 low). 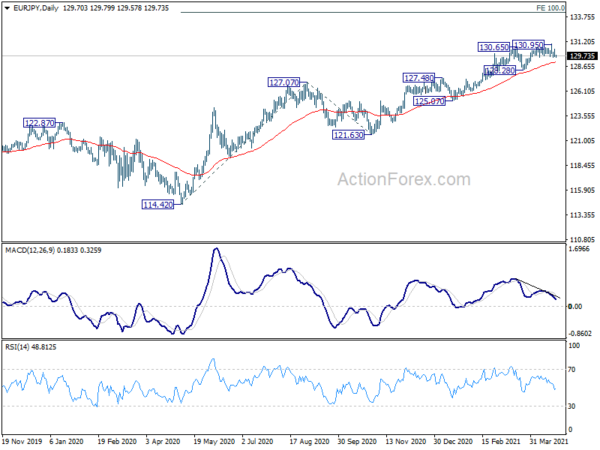