Risk sentiments seem to have firm up again today despite rather poor economic data. Major stock indices in Europe are in black while US futures point to higher open. WTI crude oil is also extending recent rebound, with June contract now above 26.2. Commodity currencies are generally higher as led by Australian Dollar. Yen and Swiss Franc are the weakest ones, followed by Euro. Sterling’s post BoE rebound faded quickly. Dollar also shrugs off another set of huge jobless claims numbers and stays mixed.

Technically, while Euro and Swiss Franc stay generally weak, there is no follow through selling. Focus might now turn to commodity Yen crosses for gauging the underlying strength of risk rally. In particular, AUD/JPY is now eyeing 68.98 minor resistance. Break will indicate completion of pull back from 70.16. With 67.29 support defended, near term bullishness is retained. Further rise would be seen back to 70.16 high. CAD/JPY is also eyeing 76.13 minor resistance. Break will suggests short term bottoming and bring stronger rebound towards 77.25 resistance and above. 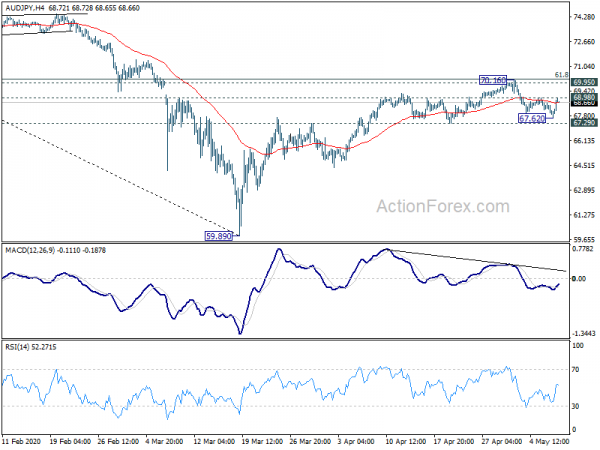 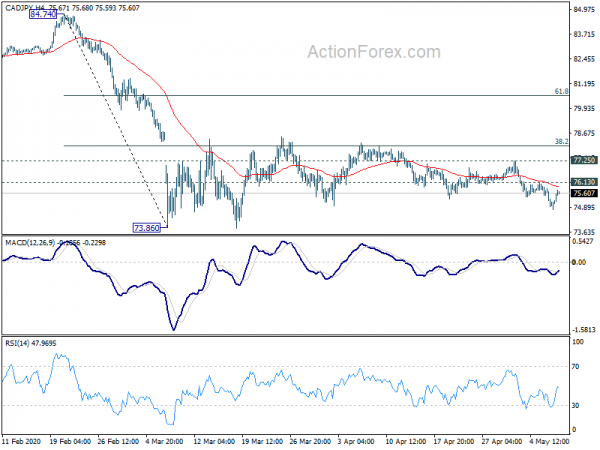 Fed Kashkari: Recovery looks like it’s going to be slow

Minneapolis Fed President Neel Kashkari told NBC today that tomorrow’s NFP report might show unemployment rate surging to 17%. But the actual rate might be even higher at 23%. Also, “that bad report tomorrow is actually going to understate how bad the damage has been.”

He emphasized that “the Federal Reserve is acting aggressively, we will continue to act aggressively,” to support the economy. But “Unfortunately, the recovery looks like it is going to be slow,” after the coronavirus pandemic.

“The virus is still spreading throughout much of the country,” he said. “We have to continue to be very measured and not reopen too quickly because we may pay the price for that.”

BoE kept interest rate unchanged at 0.10% as widely expected, with unanimous vote. Asset purchase target was held at GBP 645B, but by 7-2 vote. Two members, Jonathan Haskel and Michael Saunders, preferred to increase the target for the stock of asset purchases by an additional GBP 100B. The central bank said it “stands ready to take further action as necessary to support the economy and ensure a sustained return of inflation to the 2% target.

The central bank said the timeliest indicators of domestic demand have “generally stabilized” at very low levels in recent weeks. Payments data point to around 30% reduction in household consumption. Consumer confidence has “decline markedly” and housing market activity has “practically ceased”. Companies’ sales are expected to be around 45% lower than normal in Q2, business investment 50% lower. Sharp increased in benefit claims are consistent with a pronounced rise in unemployment rate. CPI is likely to “fall below 1%” in the next few months.

BoE Bailey: The Bank will act as necessary to deliver the monetary and financial stability

BoE Governor Andrew Bailey pledged that “however the economic outlook evolves, the Bank will act as necessary to deliver the monetary and financial stability that are essential for long-term prosperity and meet the needs of the people of this country.” That is the central bank’s “total and unwavering commitment” to safeguard the UK economy during the current coronavirus crisis.

He also noted that the central bank is “not out of monetary policy tools”. It’s appropriate to continues with “aggressive pace” of QE for the moment. Further, there will be another MPC meeting “before getting anywhere near completion of the QE program”. But, “it’s about what is the appropriate response and what information, news, we think we’re going to get in the quite near future.”

Bailey’s comment affirmed markets’ views that BoE is on a wait-and-see approach for the moment. He left the door open for more easing if situations don’t improve over Q2.

EU Hogan: UK not approaching Brexit negotiations with a plan to succeed

EU Trade Commission Phil Hogan slammed UK’s Brexit negotiation approach as he talked to Irish national broadcaster RTE today. He said, “despite the urgency and enormity of the negotiating challenge, I am afraid we are only making very slow progress in the Brexit negotiations.”

“There is no real sign that our British friends are approaching the negotiations with a plan to succeed. I hope I am wrong, but I don’t think so,” he added. “I think that the United Kingdom politicians and government have certainly decided that COVID is going to be blamed for all the fallout from Brexit and my perception of it is they don’t want to drag the negotiations out into 2021 because they can effectively blame COVID for everything.”

ECB Makhlouf: German court ruling won’t get in the way of ECB doing its job

ECB Governing Council member Gabriel Makhlouf said German Constitutional Court ruling on ECB asset purchases was an “interesting judgment”. Yet, “fundamentally it doesn’t actually get in the way of the ECB carrying on with its incredibly important job, especially at this time in the crisis”.

“We are determined to respond forcefully to the challenges and to do whatever it takes to deliver our mandate,” he added. “The judgement is directed at the German government and the German parliament. It looks as if it runs counter to what the European Court of Justice indicated just over a year ago but the ECB itself acts very transparently,” he said.

Zhengsheng Zhong, Chairman and Chief Economist at CEBM Group said, “domestic services activity remained under notable pressure amid the coronavirus pandemic”. New export orders shrank at a steeper rate in April than in February, “indicating that the March rebound in exports was not sustainable”. “The second shockwave for China’s economy brought about by shrinking overseas demand should not be underestimated in the second quarter”

Australia AiG services dropped to 27.1 in Apr, trade surplus swelled to 10.6B in Mar

Australia AiG Performance of Services Index dropped -11.6 pts to 27.1 in April. This was both the largest single monthly fall and the lowest result in the history of the series (commencing in 2003).

AiG said: “Activity restrictions in response to the COVID-19 pandemic have decimated large segments of Australia’s services industries. The Australian PSI® indicated contraction in all sectors in April (trend). 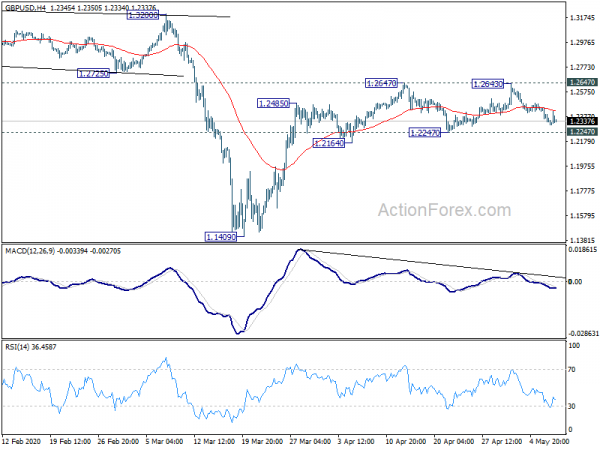 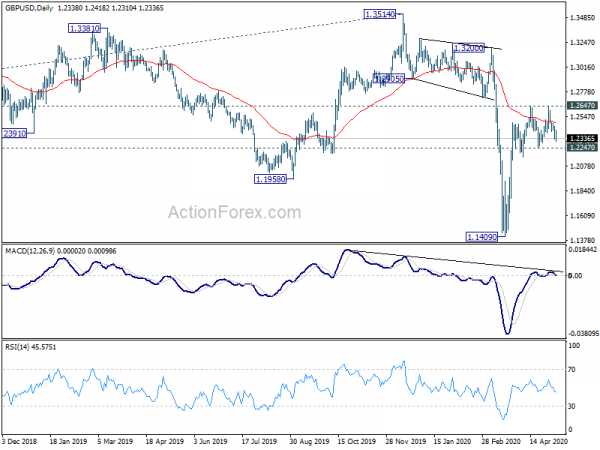