What Leads Dollar and S&P 500 to Stop Flirting With Volatility and Break Congestion?

We have closed out the third week of the new trading year, but the return of liquidity has not brought with it a sense of conviction from the speculative rank. There remain underlying conditions that are acting to throttle a full-blown sentiment charge – whether it coalesce around a bullish or bearish view. Seasonal norms for activity and performance from benchmarks like the VIX and S&P 500 respectively are not particularly conducive to trend development, but the more generic imbalance of anticipation overriding reaction was a more tangible influence. The event risk this past week simply didn’t rise to the occasion of definitively tipping the scales of conviction behind risk trends. From the Chinese 4Q GDP update to the BOJ rate decision to Netflix earnings, the data was noteworthy and even volatility inducing for specific segments of the financial system. But, systemic it was not. Some of the event risk that we have on tap for the week ahead is of significantly greater speculative breadth. Could US GDP, January PMIs, Microsoft earnings or the Fed’s favorite inflation indicator ignite a larger fire?

Part of the equation when it comes to evaluating the market’s ability to commit to a more significant trend is the backdrop. From a technical perspective, there is an abundance of prominent technical barriers that could be deemed ‘significant’ if they were breached. For the S&P 500, the boundaries have been overt and thoroughly harassed. The well-worn 3,900 floor was tagged, but only after the bulls failed to capitalize on a close above the closely-watched 200-day SMA (simple moving average). That particular moving average has played a key role in carrying trend with critical tests and breaks in the past amplifying its weight. Yet, it’s relevance seems to have significantly diminished as of late – something to consider when with the S&P 500 closing above the technical measure by Friday’s close.

Meanwhile, a bigger picture consideration is the argument made for the markets already fully discounting future fundamental troubles with the technical ‘bear market’ in 2022. While a significant correction, we have only modestly corrected the previous decade’s build up and there has been no panicked unwinding in the market that rouses the opportunism appeal. Why? With the general risk/reward behind the market (above the 2-year Treasury yield as a ratio with the VIX) still climbing; fear has been muted. In the absence of a full market ‘flush’, systemic fundamental trends are more important for guiding next stages. I believe there are still two dominant themes dictating the bulk of the market’s sentiment: monetary policy and growth forecasts. Ove the coming week, we will come into event risk that taps both themes, but I believe recession risks are the least scoped threat with the greatest potential. We have a ‘developed world’ economic update on tap this week and the IMF will give an interim update on its World Economic Outlook (WEO) on January 31st, but official 4Q GDP reading for the world’s largest economy is due Thursday. In honor of this event risk, I asked traders whether they believed the United States would fall into a recession in 2023. After 200 votes, 72 percent believe it will.

Looking to the economic docket, there is a run of notable developments for which we should keep track. In the background, keep in mind that the Chinese markets will be offline for the whole week in celebration of the New Year. However, considering the Chinese markets are disconnected from Western markets, it is unlikely to exert a significant influence on global speculative discovery. On the monetary policy from, the Bank of Canada rate decision is the most pointed event, but its breadth of influence is narrow. The PCE deflator due Friday is the Fed’s favorite inflation indicator, but it hasn’t registered big response from the market – likely due in part to its Friday release time. There are plenty of growth-oriented updates from January PMIs on Tuesday to US earnings with Microsoft’s update at the top of the heap, but the top listing has to be the US 4Q GDP release on Friday. According to the consensus economist forecast, the US is expected to have grown an annualized 2.6 percent through the final quarter of 2022. There is likely a skew to the scenarios around this event risk. If the data is strong, it can be read as justification for the Fed to keep pushing the fight against inflation with higher interest rates. If it is weak, risk aversion can kick in (which would also benefit the Dollar’s safe haven status). 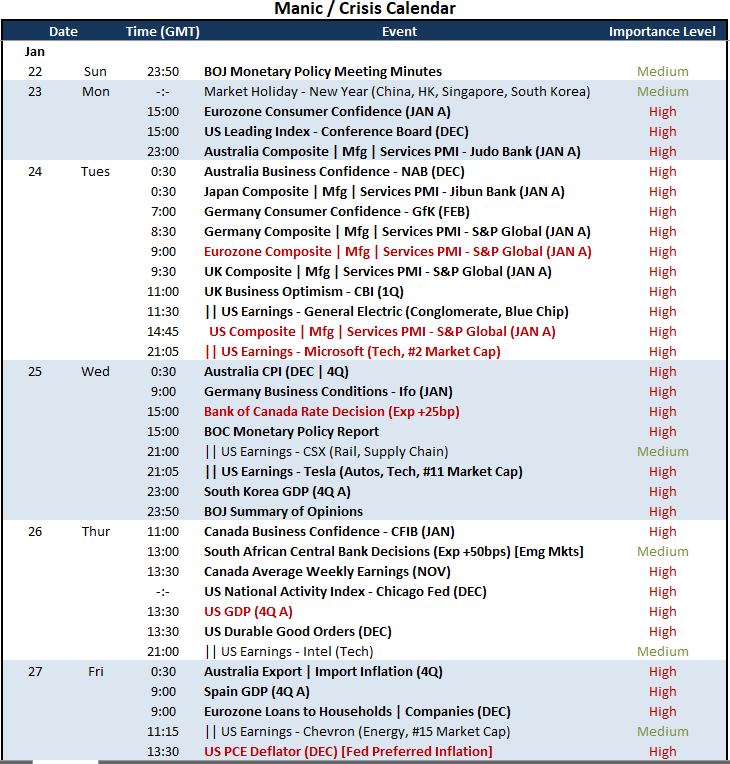 When it comes to the Dollar, there is an argument to be made that it is under genuine pressure that warrants a progressive depreciation – an economic outlook that is significantly weaker than counterparts; default risk with the debt ceiling brinkmanship or international diversification away from the Greenback among them. That said, I believe much of the tumble the DXY Index has registered these past few months is the result of a speculative retreat on the preceding rally charged by the combination of risk aversion and the leading interest rate charge from the Fed. Unwinding excess premium is by its nature a limited engagement when the over-extension is resolved. Considering the Dollar retraced half of its nearly two-year climb in just a few months (we are at the midpoint of the 2021-2022 run), questions about how over-extended the market was are reasonable. 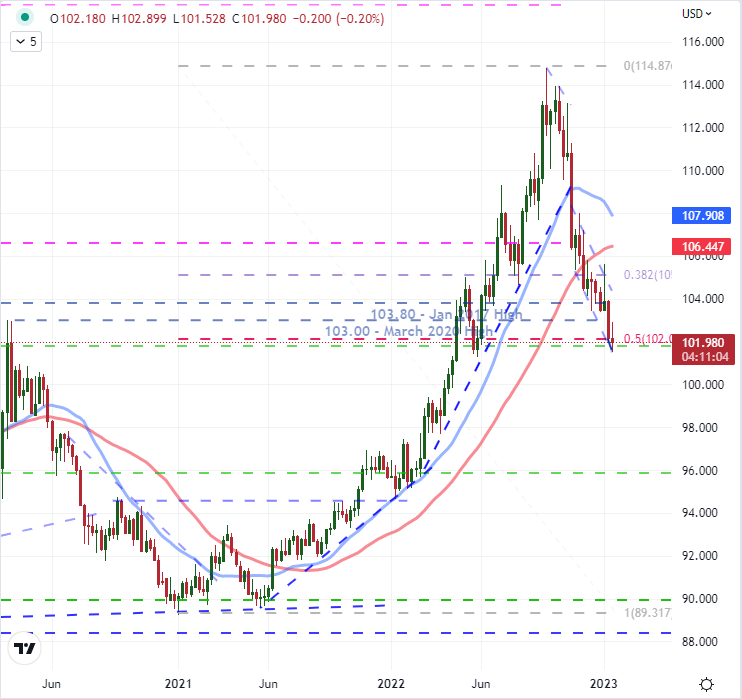 When looking to the Dollar’s potential, there are two speeds to evaluate. There is EURUSD which has worked its way into an exceptionally tight six-day trading range immediately after breaking a high-profile resistance at 1.0750. That leaves speculative interests in a lurch. I am monitoring that pair for a break regardless of direction as the congestion is itself extreme. Alternatively, there are pairs that more distinctly highlight the exaggerated tempo of the Dollar’s selloff and thereby better positioned to evaluate its larger bearing. For that perspective, I’m monitoring USDJPY which posted its most aggressive three-month slide since the height of the 2008 Great Financial Crisis. With a very explicit descending trend channel, the technical boundaries make for a distinctive evaluation. 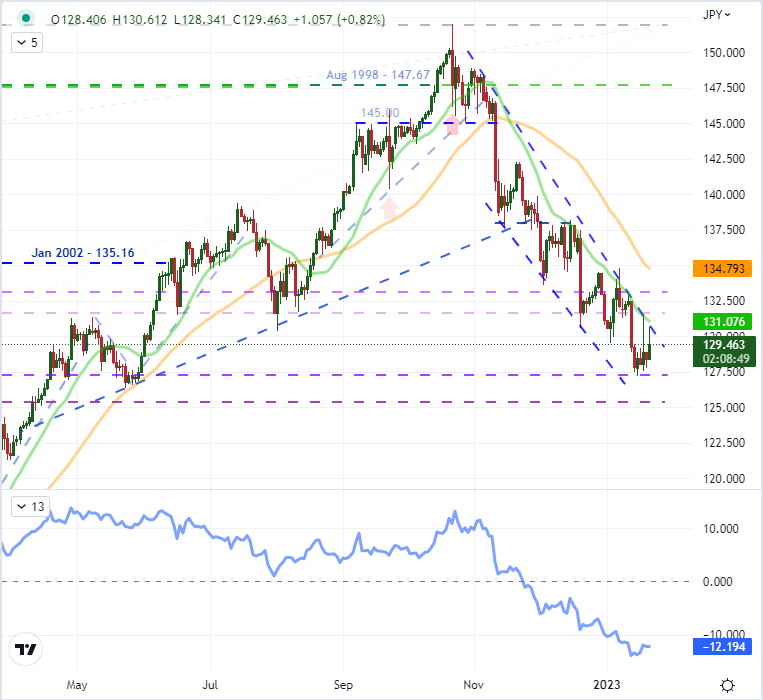 Meta Masters Guild is in the spotlight. Why’s that?

Meta Masters Guild is in the spotlight. Why's that?

EUR/USD holds at around 1.0860s as traders brace for the Fed and ECB’s decisions

Bitcoin and Ethereum were both stable over the weekend