Global stock markets are lifted by the agreement on the EUR 750B Next Generation EU recovery package. Commodity currencies surge broadly with Australian Dollar leading the way. RBA Governor indicated that the current exchange rate is inline with Australia’s fundamentals. On the other hand, Dollar, Yen and Swiss Franc are under broad based pressure due to strong risk-on markets. Euro is also weak after traders take profits after the news of the stimulus deal.

Technically, AUD/USD’s break of 0.7064 suggests resumption of whole rebound from 0.5506. Next major target will be 55 month EMA at 0.7316. EUR/AUD is also heading back to 1.6033 support with today’s steep decline. Firm break there will resume whole fall from 1.9799. AUD/JPY is also accelerating sharply higher today and is set to take on 76.78 high very soon. 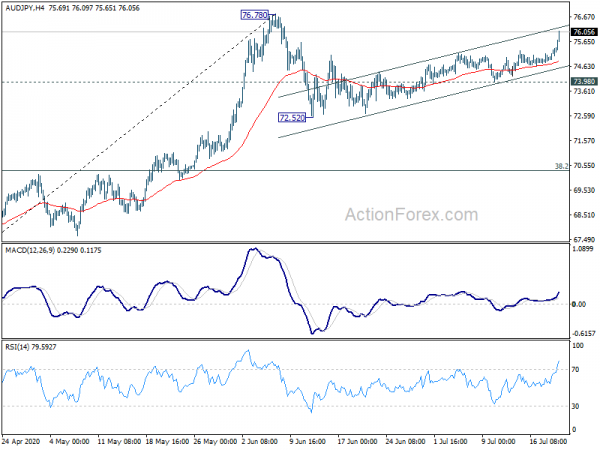 Canada retail sales rose 18.7% mom to CAD 41.8B in May, below expectation of 21.0% mom rise. It’s also insufficient to recover April’s -26.4% mom decline. Additionally, sales were also -20% below February’s pre-pandemic level. Sales were up in 10 out of 11 sub sectors, Motor vehicle and parts dealers, general merchandise stores, as well as clothing and clothing accessories stores were the main contributors to the rebound.

Statistics Canada also said that in advance estimate of June, retail sales would increase 24.5% mom. But owing to its preliminary nature, the figure should be expected to be revised.

RBA Lowe: Negative rates and FX intervention are not directions to head in

RBA Governor Philip Lowe reiterated in a speech that “there has been no change to the Board’s view that negative interest rates in Australia are extraordinarily unlikely”. Negative interest rates would come with costs and causes “stresses in the financial system”. They would also “encourage people to save more rather than spend more”. It’s “not a direction we need to head in”.

Meanwhile, there is evidence that Australian Dollar’s exchange rate is “broadly in line with its economic fundamentals”. Foreign exchange market intervention would have “limited effectiveness” and involve “substantial financial risks to the public balance sheet and complicate international relationships. Hence, “this too is not a direction we need to head in”.

On the economy, he said “fortunately, we have now turned the corner” in the labor market. Many firms heavily affected by the coronavirus shutdowns are now “rehiring and lifting hours” as restrictions are eased in most of Australia. However, in some sectors like construction and professional services, the pipeline of work is “drying up” as new orders have declined. Hours worked in these businesses will decline further ahead.

Lowe expected unemployment is likely to “increase further, even with the recovery underway”. Many people who lost they job will “start looking for jobs” and thus be classified as rejoining the labor force. That will push up the measured unemployment rate, like what happened with June’s figures. One of the keys to returning to a strong labor market is “restoring confidence”.

Japan CPI core rose to 0% in Jun, out of negative region

The pickup in CPI core out of negative territory suggests that impact of free fall in energy prices earlier this year started to fade. There could also be some stabilization effect as the nationwide state of emergency was lifted in late May. Yet, there is little chance of a strong rebound in inflation, nor the economy, as external and domestic demand remain weak with coronavirus pandemic dragging on. 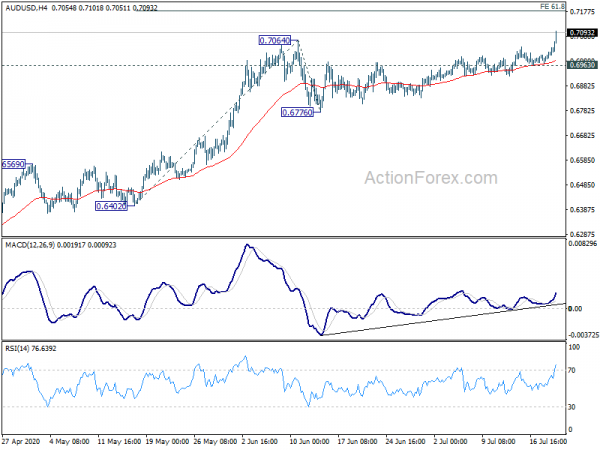 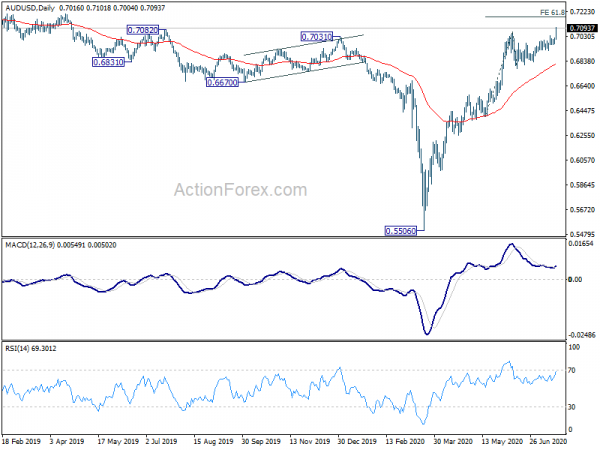