Sterling recovers mildly today after BoE left monetary policy unchanged as widely expected. Two members voted for an increase in asset purchase but that was shrugged off by the markets. Though, Australian Dollar is even stronger for the moment. Yen weakens mildly together with Swiss Franc. But for the week, Yen remains the strongest, followed by Aussie and then Dollar. Euro is the worst performing followed by Swissy.

Technically, Euro’s weakness could be a focus for today. In particular, comparative strength with Sterling might send EUR/GBP to a test on 0.8670 temporary low. Break will resume the decline from 0.9499 to 0.8276/8595 support zone. EUR/JPY is pressing 114.39 projection level and break will extend current down trend to next projection level at 110.21. EUR/USD is also eyeing 1.0727 and break will put focus to 1.0635 low.

BoE kept interest rate unchanged at 0.10% as widely expected, with unanimous vote. Asset purchase target was held at GBP 645B, but by 7-2 vote. Two members, Jonathan Haskel and Michael Saunders, preferred to increase the target for the stock of asset purchases by an additional GBP 100B. The central bank said it “stands ready to take further action as necessary to support the economy and ensure a sustained return of inflation to the 2% target.

The central bank said the timeliest indicators of domestic demand have “generally stabilized” at very low levels in recent weeks. Payments data point to around 30% reduction in household consumption. Consumer confidence has “decline markedly” and housing market activity has “practically ceased”. Companies’ sales are expected to be around 45% lower than normal in Q2, business investment 50% lower. Sharp increased in benefit claims are consistent with a pronounced rise in unemployment rate. CPI is likely to “fall below 1%” in the next few months.

Australia AiG services dropped to 27.1 in Apr, trade surplus swelled to 10.6B in Mar

Australia AiG Performance of Services Index dropped -11.6 pts to 27.1 in April. This was both the largest single monthly fall and the lowest result in the history of the series (commencing in 2003).

AiG said: “Activity restrictions in response to the COVID-19 pandemic have decimated large segments of Australia’s services industries. The Australian PSI® indicated contraction in all sectors in April (trend).

Zhengsheng Zhong, Chairman and Chief Economist at CEBM Group said, “domestic services activity remained under notable pressure amid the coronavirus pandemic”. New export orders shrank at a steeper rate in April than in February, “indicating that the March rebound in exports was not sustainable”. “The second shockwave for China’s economy brought about by shrinking overseas demand should not be underestimated in the second quarter”

DOW once again failed to hold on to initial gains and closed down -218.45 pts, or -0.91%, at 23664.64 overnight. S&P 500 dropped -0.70% but NASDAQ managed to close up 0.51%. Renewed US-China tension remains a factor limiting risk appetite. US President Donald Trump’s administration is weighing actions against China over its early cover-up and other handling of the coronavirus outbreak. The pandemic has eventually turned into, as Trump described, an attack that’s “worse than Pearl Harbor”, and “worse than the World Trade Center”.

Trump said he’s “watching closely” whether China is meeting its commitment on the trade deal phase one. “I’ll be able to report in about a week or two as to – not only with the farmers, but with many other industries also,” he added. “They understand they have a deal and hopefully they’re going to get with the deal and we’ll see. They may. They may not. We’re going to find out.” He’s threatened to pull out from the deal and go back to tariffs.

DOW’s struggle to sustain above 55 hour EMA, as well as persistent bearish divergence condition in hourly MACD are both seen as sign of topping. Indeed, it’s also possibly forming a near term head and shoulder top (ls: 24264, h: 24764, rs: 21469). Immediate focus is now on 23361.16 support before the weekly close. Break there should indicate completion of the pattern. Further break of 22941.88 support, probably next week, should confirm near term bearish reversal for a test on 18213.65 low. 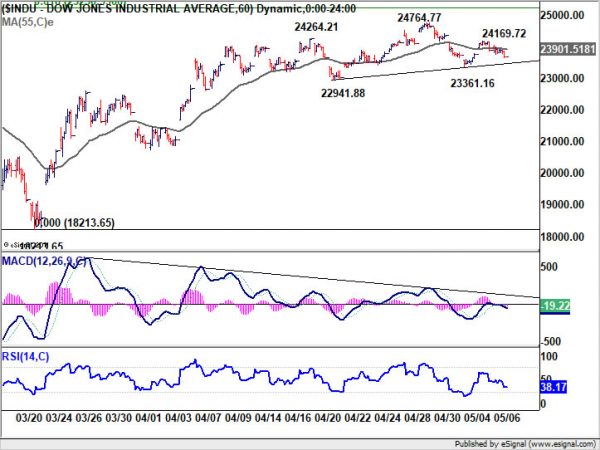 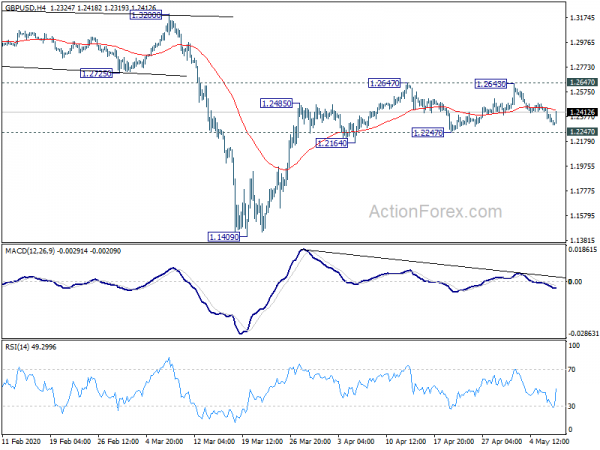 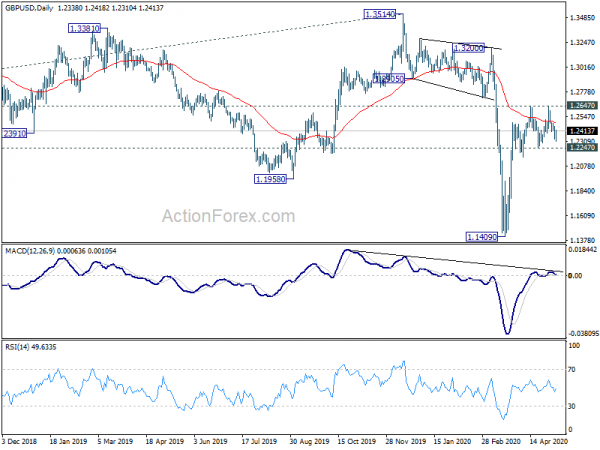