Seasonal norms won out this past week, which is incredible considering the threat of an impending recession grew considerably more tangible and market complacency has pushed to blatantly extreme levels. Looking back at the performance of the various benchmark risk assets that I monitor for a global perspective, it was clear that the bid wasn’t siloed to specific asset or regions. Global indices, emerging markets, high yield fixed income, carry trade and some speculative-oriented commodities posted notable gains. In some cases, the bullish interest comes with the technical context of a recovery from significantly depressed levels – like the Nasdaq 100 which is only 5 percent away from tipping into new multi-year lows. For such markets, nuanced changes in key themes can foster a rebound that can subsist as a counter-trend ‘bounce’ without spurring the commitment necessary for a long-term bull trend. On the other hand, we have certain measures that flagrantly defy traditional fundamentals and will draw much greater scrutiny – as with the UK’s FTSE 100 at multi-year highs and within easy reach of records.

Focusing in on my preferred ‘imperfect’ benchmark for risk, the S&P 500, there was a nascent charge that doesn’t raise the specter of a definitive trend. The index finally managed to clear out an exceptionally narrow 13-day trading range that was the hold over of holiday conditions. The break may also be at least be a partial by-product of those seasonal conditions as well. Breaking down the S&P 500’s average weekly performance over the calendar year, the first week has averaged the strongest overall gain of the entire 52-week period back to 1900. A 1.0 percent averaged gain isn’t far off the 1.5 percent advance that was largely earned on Friday’s session. Whether this was more a genuine break (one I would consider backed by ‘conviction’) or capital flows associated with reinvesting capital to start the year will be put to the test in the week ahead. We broke the narrow, near three week range, but the midpoint of the August – October range and range low from November 11th to December 14th at 3,910 is still overhead.

The market’s next leg – in sentiment as much as the US indices – will draw increasingly on the market’s fundamental convictions as the tide in liquidity levels out. The pace for which we anchor back into predictable themes depends on circumstances, but I like to also evaluate markets according to potential. There is a possibility that speculative markets resolve to the bulls to continue the recovery from 2022’s broader losses as much as there is a probability that the bears regain control over the yoke as the systemic themes continue to paint a negative picture. The outcome depends on the path of key events as well as the prioritization of the masses. That said, I believe there to be a skew in the ‘potential’ of the different outcomes. Should bullish interests (say in the S&P 500) win out, it is more likely to be based in nuance such as a ‘mild recession’ or ‘slightly lower oppressive interest rates’. That would likely lead to slower and choppier gains, especially with the market’s sense of implied risk so low. Conversely, an eruption of fear could amplify a market that is poorly positioned to absorb the bears. Consider the VVIX ‘Volatility of Volatility’ Index. It dove to its lowest level since March 2017. I would say that is remarkably complacent. 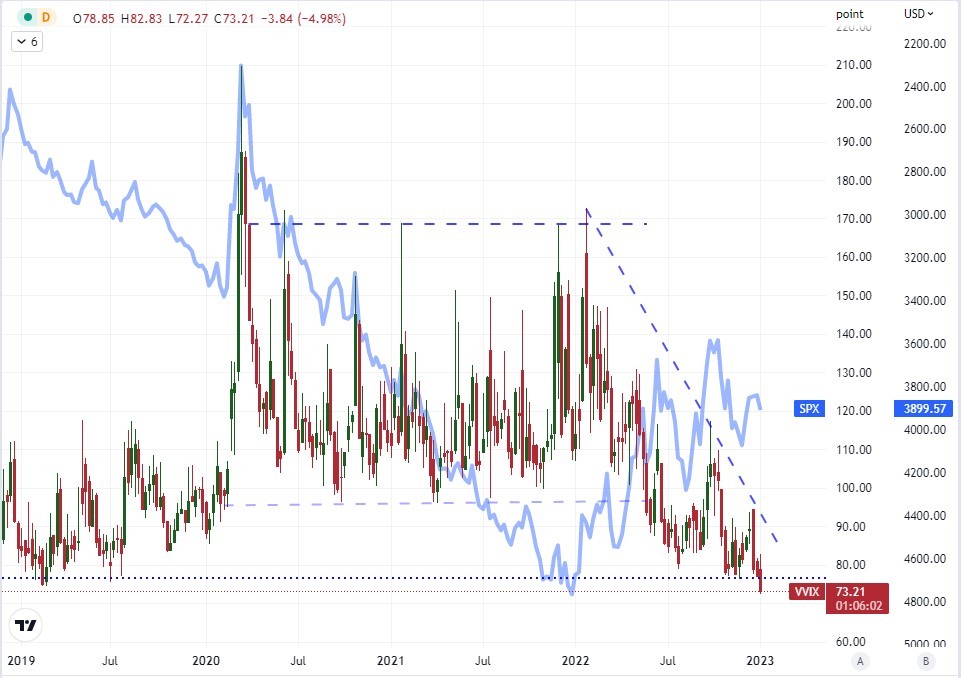 A big consideration for what shape the markets take in the week and weeks ahead is what the top fundamental focus shakes out to be. This past week, we were presented the unique opportunity to test two of the leading considerations on the macro spectrum: rate speculation versus growth forecasting. The Friday morning US nonfarm payrolls seemed to give a light push in favor of Fed prognostication when the 226,000 net increase modestly beat expectations, dampening economic concerns; while the average hourly earnings growth decelerated to 4.6 percent year-over-year to modestly ease terminal rate projections. Perhaps if it were not for the NFPs, the reaction to the ISM service sector activity report could have been very different. Representing a timely look at the largest component of economic activity and employment in the US, the ISM reading dropped 6.9 points and into ‘contractionary’ territory. Such an event lines up very well to past recessions, but that didn’t seem to hit the market’s radar. With a perspective that Fed expectations were already easing, this would amplify the move. But are slightly lower Fed rates really a greater boon for markets than a recession is a threat?

Chart of ISM Service and Manufacturing Surveys, S&P 500 and US Recessions (Monthly) 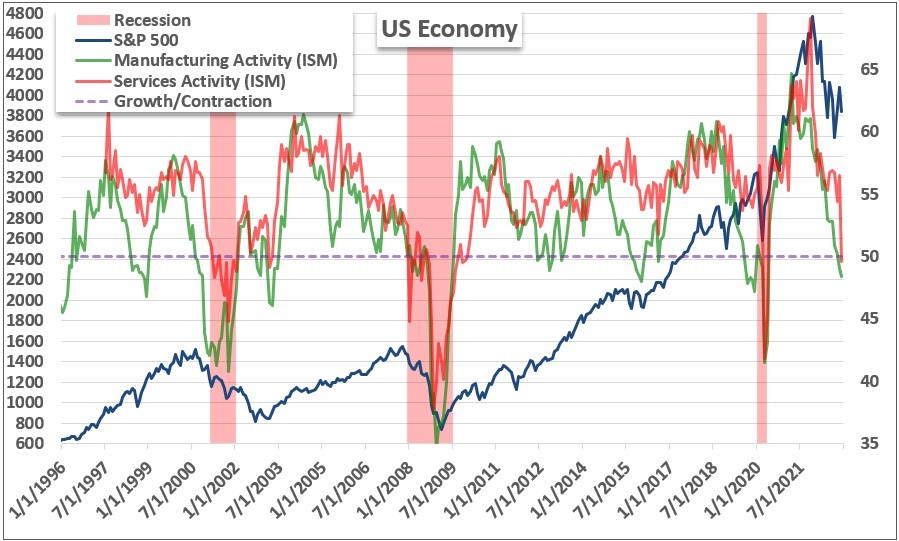 For something like the US Dollar, the push and pull of an interest rates versus growth question is not as pressing. It can certainly respond to both themes in its role as the world’s most liquid currency – and the many guises it dons given that position. Considering the Fed Fund futures implied June dropped to 4.95 percent with US 2-year yields posting their biggest single-day slide since November 10th’s CPI release, the implications for the Greenback as a recent carry benefactor were straightforward. This currency is more sensitive to the particulars of Fed yield curve forecasting so long as the more systemic matters of global sentiment don’t crowd out our senses. Should risk aversion kick back in, the bid for a safe haven like the Dollar will start to conflict with a likely further slide in rate projections. The more intense a sentiment swoon, the scales will tip for the USD to act as a liquidity provider of last resort. It would take quite the dive to escalate our fears to that scale, but it is certainly within the scenarios we could face ahead as liquidity is topped off. 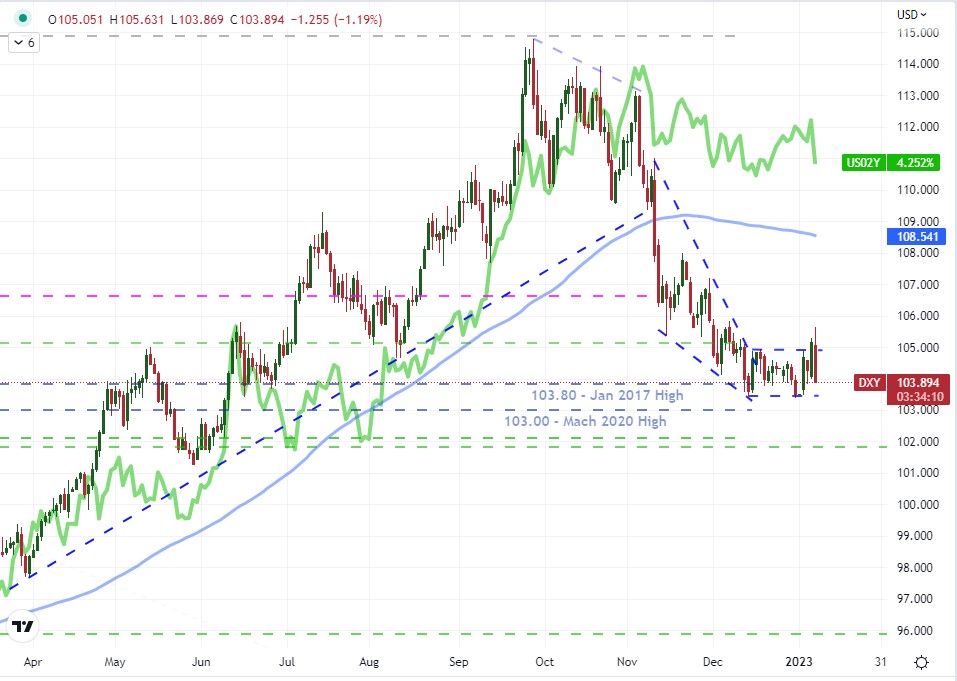 Ultimately, the US doesn’t have the lock up on dictating global sentiment. Then again, its scale does give it greater sway when its own conditions are developing significantly. What’s more, the economic calendar for the coming week seems to be disproportionately weighted towards US influence. For interest rate speculation, we have the market’s favorite inflation indicator, the CPI, due for release on Thursday. Fed Chairman Powell will also be speaking on Tuesday, but his comments could just as readily spill into an economic assessment considering how frequently he has mentioned that side of the coin of late. Friday’s bank earnings and University of Michigan consumer sentiment report, though, are much more likely to start with a growth perspective. 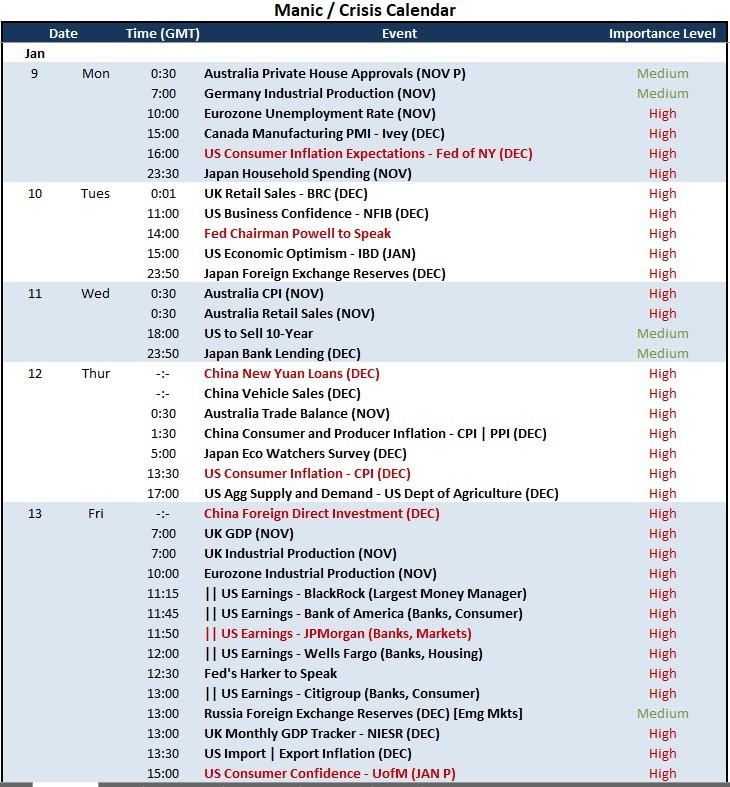 Why It is a Great Broker