We expect RBNZ to leave its OCR at 0.25% at the May meeting. However, given the prospect of very gradual economic recovery, policymakers would maintain a dovish tone and suggest that further stimulus measures are likely. QE expansion is a likely move. The question is whether it will be announced this month or in June. Government’s fiscal policy is an important determining factor for RBNZ’s decision. The central bank is also expected to cut its GDP growth and inflation projections for the year.

RBNZ cut the policy rate, by -75 bps, to a record low of 0.25% in March. It also introduced a Term Auction Facility, FX swap and a NZ$30B US dollar swap line, ensuring funding of banks and preventing a surge in the cost of bank funding. Besides, the central bank also embarked QE. Under the Large Scale Asset Purchase (LSAP) and the Local Government Funding Agency (LGFA) programs, RBNZ planned to buy NZ$ 30B and NZ$3B, respectively, of New Zealand Government bonds over the next 12 months across the yield curve, as “financial conditions have tightened unnecessarily over the past week”.

The first coronavirus case was reported on February 28 and the government announced a lockdown of the country on March 26. These made the first quarter economy relatively less affected by the pandemic. However, risk is to the downside for the developments in the second quarter. The unemployment rate increased +0.2 percentage point to 4.2% in 1Q20. Growth in payrolls improved to 0.7%, from 0% in 4Q19. The participation rate also added +0.3 percentage point to 70.4%. Although the job market appeared resilient, labor cost weakened, increasing only +0.3% q/q, compared with consensus of +0.4% and +0.6% in 4Q19. Inflation accelerated to +2.5% y/y in 1Q20, from +1.9% in the prior quarter. This also beat consensus of +2.1%. However, the outlook is cloudy. Inflation expectations fell to +1.24% for 2Q20, from +1.93% in the prior quarter.

Prime Minister Jacinda Ardern has just announced that the alert level will be lowered to level 2 from level 3 amidst stabilization of the coronavirus outbreak in the country. On Thursday, cinemas, retail stores, playgrounds, gyms, shopping malls and community venues can resume operations but social distancing has to be maintained. Schools will remain closed until next Monday, whereas bars primarily serving alcohol will be closed until May 21. Although the lockdown is gradually being lifted, social distancing and strict hygiene measures will remain in place for an extended period of time. Hence, the pace of economic recovery will only be gradual.

Both monetary and fiscal policies will be accommodative for years to come. On the monetary front, the policy rate has been lowered to an unprecedented low. While RBNZ has not ruled out negative rate, we do not anticipate it will come under the current circumstance. In a report on unconventional monetary policy, the central bank indicated that “the effectiveness of these tools [negative rate] could be reduced if they are used after other tools which vastly increase the supply of central bank money, such as large scale asset purchases or foreign asset purchases”. It added that “this reduction in effectiveness reflects that bank profits are more sensitive to very low interest rates if the money supply has been inflated, and so an inflated money supply may reduce the ability of banks to pass on low interest rates to borrowers”. 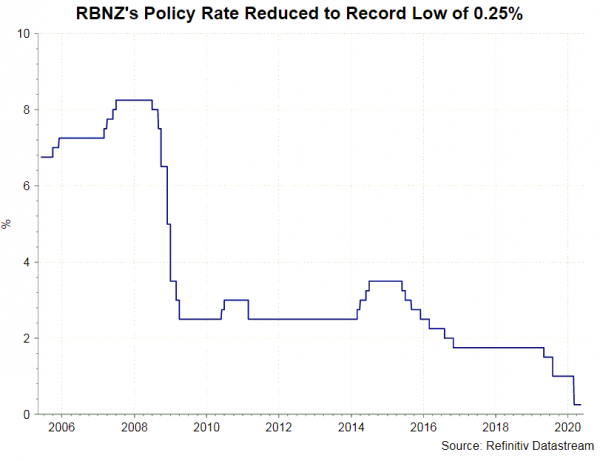 We expect RBNZ to maintain the forward guidance that “the OCR will remain at this level for at least the next 12 months”, and rely on QE to inject liquidity to the market and reduce the effective interest rates. The main purpose of RBNZ’s QE program is to absorb bonds issued by the government. The Treasury has announced a range of fiscal stimulus measures to fend off the sharp and imminent economic impacts of the coronavirus outbreak. In light of this, the Treasury has newly issued about NZ$5B of bonds, and is prepared to issue a total of NZ$17B over 2Q2020. Further issuance is expected if the government increases stimulus.

From March 25 to May 11, RBNZ has bought about NZ$10B eligible securities. The amount is higher than the planned purchase of NZ$750M per week. The central bank would have to increase the size of the asset purchase if it is set to maintain this pace and as the government accelerates expansionary fiscal policy. The market currently expects that the size of QE will be doubled.