Dollar recovers mildly in general as recent selloff is losing some momentum. The recovery is also accompanied by mild retreat in Euro as well as some weakness in Gold. Though, the strength of Dollar’s recovery is far from being strong enough to warrant short term bottoming yet. As for today, Swiss Franc and Yen are also among the stronger ones with Dollar. Australian Dollar and Sterling are the weaker ones for now. Markets would now be looking at today’s ECB meeting, as well ass tomorrow’s US non-farm payrolls for more guidance.

Technically, EUR/CHF is now pressing 1.0811 key resistance, which could determine which medium bearishness would be retained or broken. EUR/GBP recovered after breaching 0.8880 minor support but looks vulnerable. Break of 0.8880 again will indicate completion of recent rebound. EUR/CAD’s recovery faced some resistance from 4 hour 55 EMA. Rejection from there could bring another decline that sends EUR/CAD through 1.5054 support. We’ll probably know which way Euro is heading towards very soon. 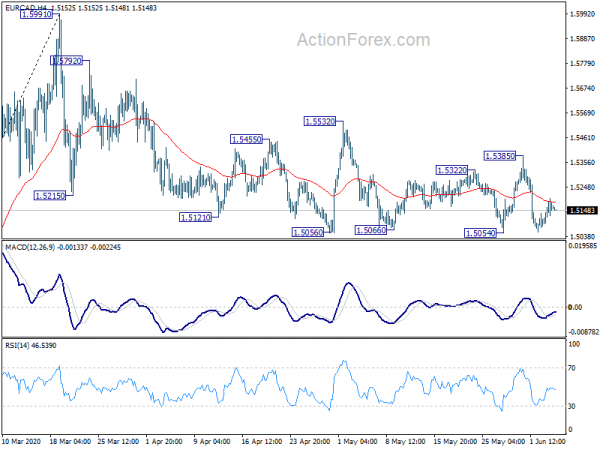 ECB monetary policy decision is a major focus for today. After recent rhetorics from the central bank’s officials, markets are generally expecting an expansion of the Pandemic Emergency Asset Purchase (PEPP) to be announced today. Additional, ECB should release new macroeconomic projections that reflect the impact of the coronavirus pandemic.

President Christine Lagarde has already indicated that the “mild scenario” of coronavirus impact is already “out of data”. The development is “it’s very likely that we are somewhere between the medium and severe scenarios”. Thus, GDP projection might be revised down to -8% to -12% for 2020. Inflation forecasts should also be sharply downgraded.

Euro is somewhat turning softer today as markets prepare for ECB decisions. The rebound in the recent weeks against Dollar, Yen, Swiss Franc, and ti a lesser extend Sterling, has been impressive. The case of a massive bullish reversal in Euro is building up. Yet, we’d prefer to see, at least some more decisive signals from EUR/CHF to confirm.

EUR/CHF is now pressing important resistance cluster between 1.0811 support turned resistance and 55 week EMA (now at 1.0826). Sustained break of this resistance zone should confirm medium term bottoming at 1.0503. Rise from there should at least be correcting the down trend form 1.2004 to 1.0503, with chance of trend reversal. In this case, further rally would be seen to 1.1059 cluster resistance (38.2% retracement of 1.2004 to 1.0503 at 1.1076). However, rejection by the current resistance zone will retain medium term bearishness for another low below 1.0503 down the road. 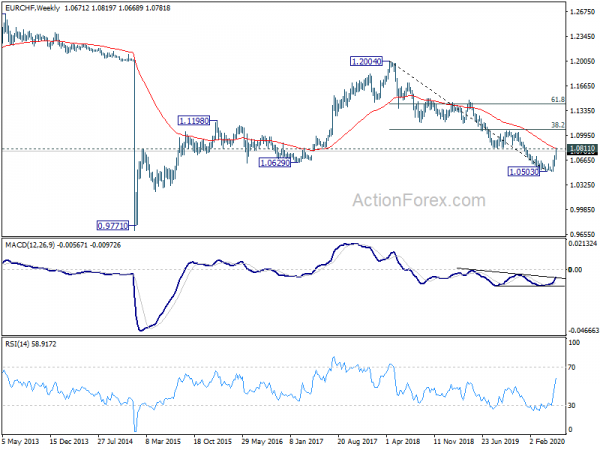 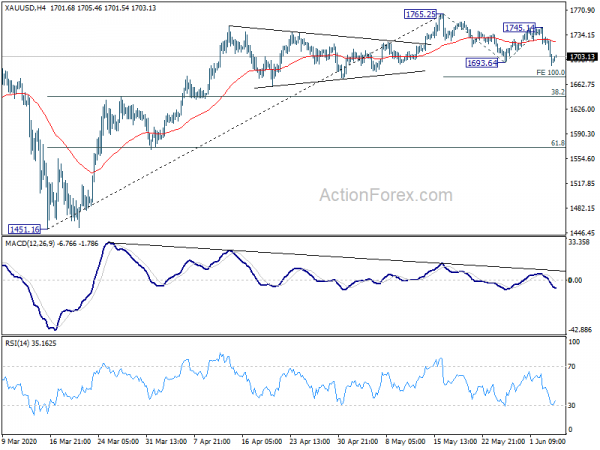 Australia retail sales dropped -17.7% mom, more than double of March’s pre-lockdown surge of 8.5% mom. “COVID-19 continued to affect retail trade in April with many retail businesses closing their physical stores during April due to restrictions relating to social distancing” said Ben James, Director of Quarterly Economy Wide Surveys. “There were record falls in cafes, restaurants and takeaway food services (-35.4%), and clothing, footwear and personal accessory retailing (-53.6%), as well as a large fall in department stores (-14.9%).”

Overnight, BoC kept interest rate unchanged at “effective lower bound” of 0.25% as widely expected. The members have turned more optimistic about the economic developments. The judged that impacts of the pandemic on global growth have “peaked” and Canada has avoided the most severe economic scenario. GDP is expected to have contracted 10-20% in 2Q20, following a -2.1% decline in the first quarter. This is better than previous forecast of a 15-30% decline. GDP is expected to resume growth in the third quarter.

On the data front

Intraday bias in EUR/USD is turned neutral with 4 hour MACD crossed below signal line. Further rise will remain mildly in favor as long as 1.1115 support holds. Break of 1.1257 will target a test on 1.1496 key resistance next. Firm break there will carry larger bullish implications. On the downside, through, break of 1.1115 minor support will revive the case that price actions from 1.0635 are merely a corrective pattern. Intraday bias will be turned back to the downside for 1.1008 support. 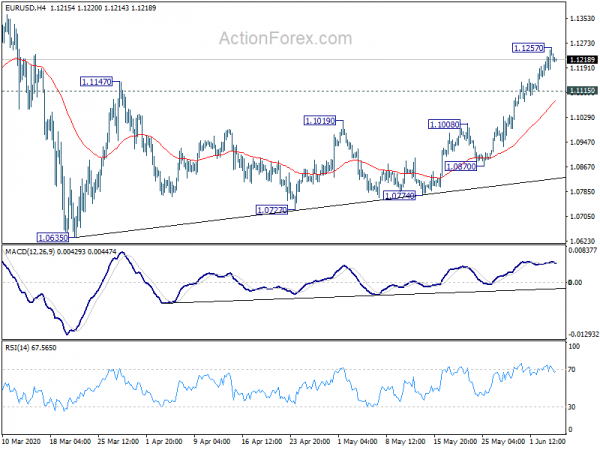 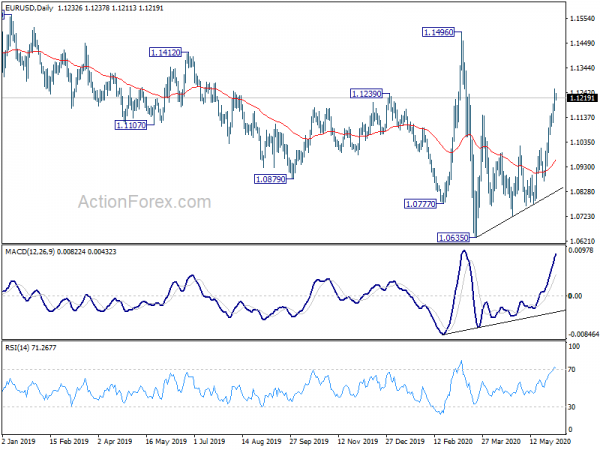