Dollar attempts to rebound after non-farm payroll employment unexpectedly rebounded while unemployment rate fell. But strength is mainly centered against Yen, Swiss Franc, and to a lesser extent Euro. Commodity currencies continue to be the strongest ones, together with Sterling. Canadian Dollar also firms up on job growth but lags behind Aussie and Kiwi.

US total non-farm payroll employment grew 2509k in May, well above expectation of -8000k decline. BLS said the improvements in the labor market reflected a “limited resumption of economic activity” curtailed in March and April due to coronavirus pandemic.

Canada employment grew 290k in May, well above expectation of -500k loss. That also represented a recovery 10.6% of the coronavirus related employment losses. Unemployment rate, however, rose to 13.7%, up from 13.0%, but better than expectation of 15.0%. That was the highest level on record too. Participation rate rose 1.6% to 61.4%, but stayed well below pre-coronavirus level of 65.5%.

ECB Chief Economist Philip Lane said in a blog post that the decision to expand the PEPP is “the proportionate response to the substantial downward revision of the economic and inflation outlooks and the significant deterioration in financial conditions”.

He added, “the incoming economic and financial data and future projection rounds will provide essential guidance as to whether the pandemic-related negative shock to inflation dynamics has been sufficiently contained.” “Once the negative pandemic shock has been successfully managed, the primary focus of monetary policy can return to its underlying strategic goal of robustly achieving our inflation aim over the medium term.”

Limited progress made in Brexit negotiations

Little progress has been made regarding Brexit negotiations as UK and EU officials indicated.

UK chief negotiator, David Frost said, “progress remains limited but our talks have been positive in tone.” He added, “Negotiations will continue and we remain committed to a successful outcome. “We are close to reaching the limits of what we can achieve through the format of remote formal rounds,” Frost said. “If we are to make progress, it is clear that we must intensify and accelerate our work.”

EU chief negotiator Michel Barnier said, “this week, there have been no significant areas of progress … We cannot go on like this for ever.”

GfK’s client strategy director Joe Staton said: “with no sign of a rapid V-shaped bounce-back on the cards, consumers remain pessimistic about the state of their finances and the wider economic picture for the year to come”. Meanwhile, “as the lockdown eases, it will be interesting to see just how the consumer appetite for spending returns in a world of socially-distanced shopping and the seismic shift to online retailing.”

Australia AiG Performance of Services Index rose to 31.6 in May, up from 27.1. While the data indicates slower pace of contraction, it’s still the second lowest result on record. In trend term, the index dropped -3.4 pts to 30.8, with declines across all services sectors.

AiG also noted, “heavy restrictions on activity in response to the COVID-19 pandemic have taken a large toll on most of Australia’s services industries… The recent easing of restrictions in some locations led to “muted optimism for businesses who responded later in May.”

USD/JPY rises to as high as 109.69 so far and broke 109.38 resistance. Intraday bias remains on the upside for a test on 111.71 resistance next. On the downside, below 108.61 minor support will turn intraday bias neutral and bring consolidations first. 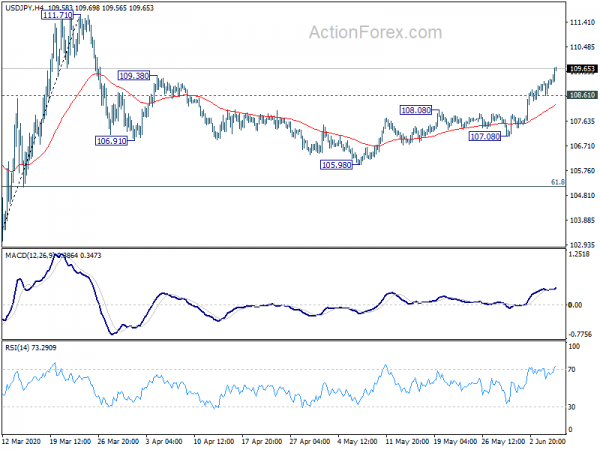 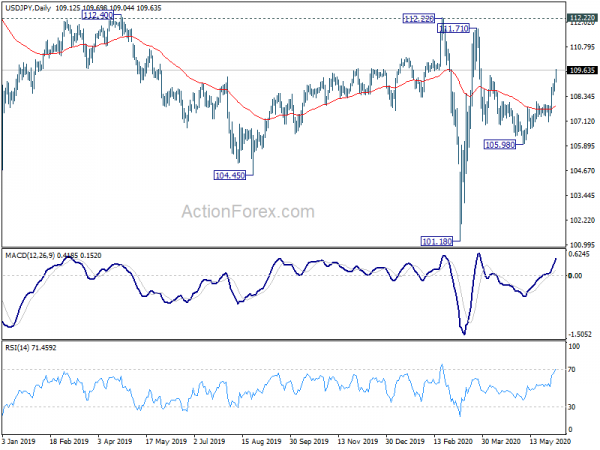