There is no apparent slow down in rally in commodity currencies against Dollar, even though risk markets turned mixed in Asian session. Australian Dollar continues to lead the way higher. Canadian Dollar is also firm as WTI oil price breach 42 handle. On the other hand, Dollar, Yen, and to a lesser extent Swiss Franc, are suffering heavy pressure. Euro does edge out a new high against Dollar through a key medium term resistance level. But the common currency is overall just mixed.

Technically, EUR/USD’s break of 1.1496 resistance carries medium term bullish implication. We’d see if the pair could sustain above this level. EUR/JPY is still on track to test 124.43 near term top. Break will resume the whole rally from 114.42. This development would at least solidify Euro’s resilience in case of further risk market rallies. Gold has already match the 1864 projection target as mentioned here. Next would be 1920 record high. 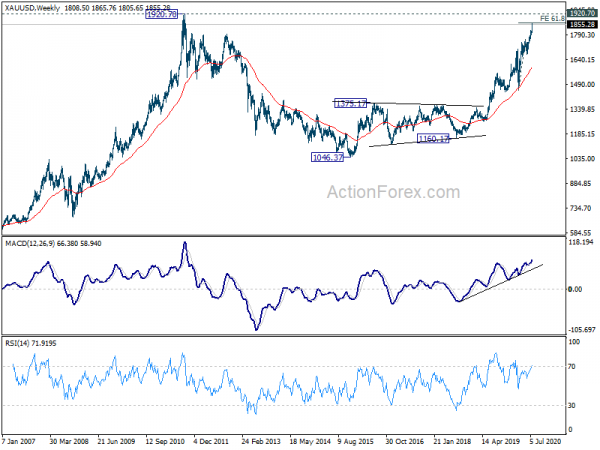 Japan PMI manufacturing rose to 42.6, any hopes of robust recovery need to be tempered

Bernard Aw, Principal Economist at IHS Markit, said: “The Japanese economy continued to struggle at the start of the third quarter, with latest flash PMI data indicating a further sharp contraction in business activity during July… Any hopes of a robust recovery need to be tempered as business sentiment about the year-ahead outlook remained pessimistic on balance”.

Preliminary data from Australia showed retail sales rose 2.4% mom in June, slowed from May’s 16.9% mom rise. Rises in Cafes, restaurants and takeaway food services exceeded 20% mom for the second consecutive month, but will remain -17% below the levels of June 2019, while Clothing, footwear and personal accessory retailing rose around 19% mom, remaining -6% below June 2019 levels.

There was also some evidence of stockpiling at the end of June too, most evident in Victoria, which is now back in lockdown as coronavirus cases rose to new high.

Australia Westpac Leading Index rose from -5.29 to -4.44 in June. Despite the modest improvement, the index growth rate remains in deep negative territory, “consistent with recession”. Westpac added, “overall, the component mix points to downside risks near term with the drivers behind the weak July readings on sentiment likely to impact on other, less timely, components that track real activity in coming months.”

Also, after yesterday’s announcement of extension to JobKeeper and JobSeeker packages, Westpac expected the government to inject around AUD 13.5B in December quarter. The stimulus was estimated to be at AUD 65B in June quarter and AUD 95B in September quarter. Thus, “the challenge for the economy…. is to adjust to such a sudden reduction in the size of government support”.

Intraday bias in USD/CAD remains on the downside at this point. Rebound from 1.3315 should have completed and deeper decline should be seen this retest this support. Break will resume whole fall from 1.4667 to 1.3056 long term retracement level. On the upside, break of 1.3646 resistance is needed to confirm short term bottoming. Otherwise, risk will stay on the downside in case of recovery. 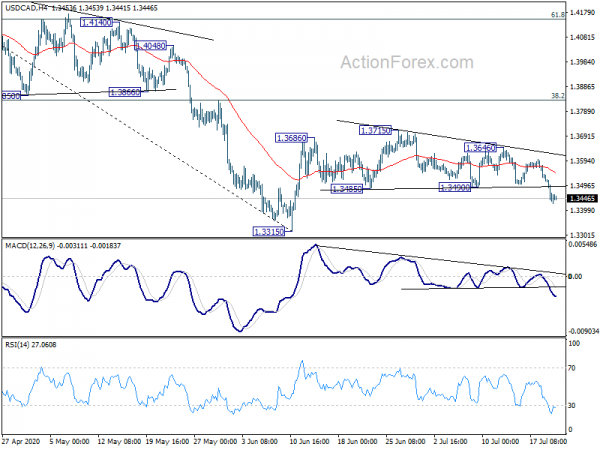 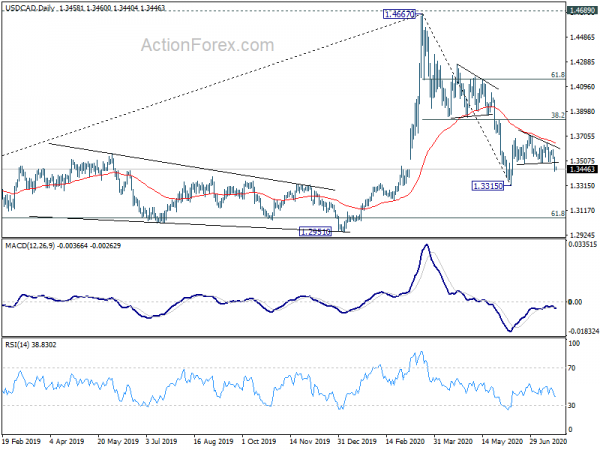