The forex markets are generally stuck inside yesterday’s range in subdued trading today. Chinese stocks attempted a recovery at the start of the session, but quickly turned into red again, continuing with Thursday’s mini-crash. Other Asian markets are mixed though, with not much reactions to weaker US close overnight. As for the week, Euro is currently the strongest, followed by Australian Dollar and then Canadian. Sterling is the worst performing, followed by Kiwi and Swiss Franc. Dollar is mixed but judging from the pull back in gold, the greenback has potential to recover a bit further before close.

Technically, gold dips back below 1800 handle as consolidation from 1817.91 is extending with another falling leg. Recent up trend is not ready to resume yet. But in any case, as long as 1773.42 support holds, upside breakout is expected eventually. We’d also maintain that Dollar has the potential for a stronger rebound, considering that it’s close to key support level against Euro and Aussie. They are 1.1496 resistance in EUR/USD and 0.7064 resistance in AUD/USD. Break of 1.1325 minor support in EUR/USD and 0.6922 minor support in AUD/USD would signal that a rebound in the greenback in underway. 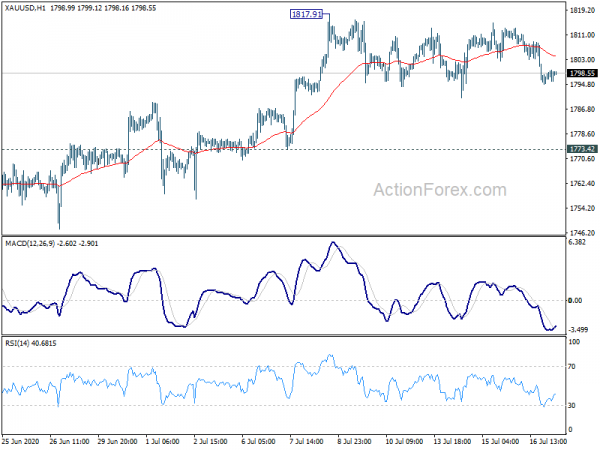 New York Fed President John Williams expected the second half to be a “continued period of economic recovery” in the US. But still, “we’re in a very deep hole” with unemployment over 11%. Right now, it’s a “critical inflection point” where Fed is seeing “mixed signals in different states”.

He also noted two signals that pointed to a “more drawn out period of getting through the pandemic”. Firstly, “businesses are struggling because they don’t have revenue.” Secondly, “state, local governments are struggling because they don’t have tax revenue or other sources of revenue right now”. Federal actions has been “absolutely critically important”.

He added that it’s “not the time to think about liftoff or normalization” of interest rates.

Fed Evans: Getting inflation up to 2% is a real problem over the next few years

Chicago Fed President Charles Evans sad the baseline outlook is for the US economy to shrink 30% to 35% in Q2, with strong growth in the second half. Unemployment rate is expected to be 9% to 9.5% by the end of the year, then fall back to 6.5% next year. The economy would only get back to prior peak by mid or late 2022. However, if there is a second wave of coronavirus infections, he would expect worse unemployment and growth.

On monetary policy, he said it’s very important to get inflation up to 2% and “I’m looking for that to be a real problem over the next few years,.” “I am hard pressed to think of reasons why we would need to move away from accommodative monetary policy unless inflation was well above 2% for an extended period of time, and the economy was just very different from what we are seeing right now,” he added. “That doesn’t seem to be very likely.”

BusinessNZ’s executive director for manufacturing Catherine Beard said: “We should remain cautious that one expansionary result does not represent a trend given ongoing offshore uncertainty around COVID-19. A consistent trail of new orders over the coming months would go a long way towards ensuring the second half of 2020 is better than the first. ”

Eurozone will release CPI final in European session. US will release housing starts and building permits, as well as wholesale sales.

Outlook in AUD/USD remains unchanged and intraday bias stays neutral first. Price actions from 0.7064 are seeing as a consolidation pattern. Upside should be limited by 0.7064 to bring another falling leg. On the downside, below 0.6922 minor support will turn bias to the downside for 0.6776 support and below. However, sustained break of 0.7064 will resume whole rise from 0.5506 instead. 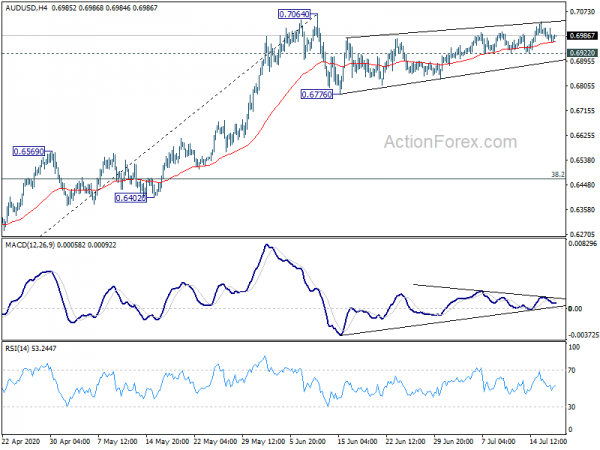 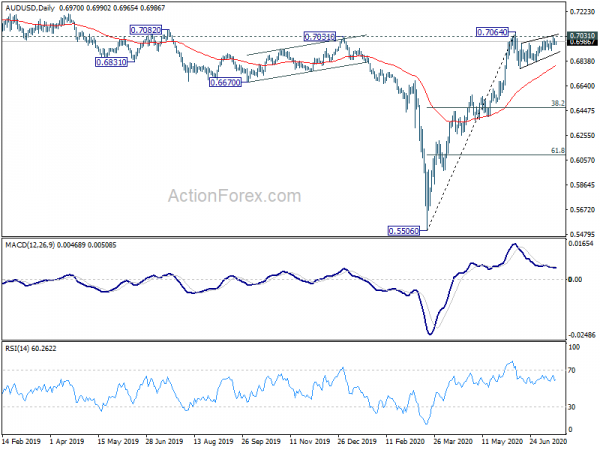