Dollar and Yen continue to be the strongest ones for today with help from risk aversion. Global stocks generally show weakness, from Asia to Europe to US futures. Major benchmark treasury yields also decline. The greenback is given another lift as US President Donald trump’s comments. On the other hand, Australian and New Zealand Dollars are the weakest, followed by Sterling.

Technically, Dollar’s rebound now puts 1.0727 support in EUR/USD into focus. Break will pave the way for a test on 1.6035 low. 1.4173 resistance in USD/CAD would also be watched and break could finally confirm completion of correction pattern from 1.4667. Australian Dollar will be watched together with risk markets. Both AUD/USD and AUD/JPY could complete double tops should 0.6372 support and 67.62 support are taken out respectively. 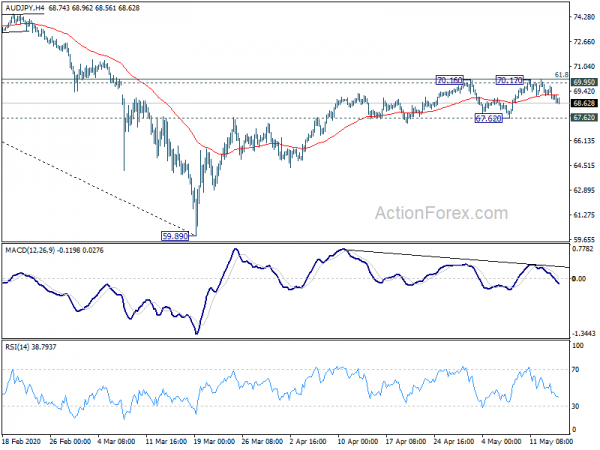 Trump: Right now having a strong dollar is a great thing

Regarding the trade deal phase one with China, Trump reiterated that “we’re not going to renegotiate”. And, “right now, I don’t want to speak to him (Chinese President Xi Jinping), I don’t want to speak to him”. He also cautioned that “we could cut off the whole relationship. If we did, what would happen? You’d save $500 billion.” (apparently referring to the trade between US and China).

BoE Bailey: Negative rate is not something we are contemplating

BoE Governor Andrew Bailey rejects negative interest at a webinar organized by the Financial times. He said, negative rate is “not something we are currently planning for or contemplating”. He added that cutting interest rate below zero would need “an extensive communications exercise” in the UK. It’s a “very big step” from “communications point of view, as well as “reaction” and expectations”.

He also warned that the economy would suffer longer-term damage from the current coronavirus crisis. Nevertheless, it’s unclear whether a 30% contraction in GDP is H1, as projected by BoE, would prove overly pessimistic or an under-estimate.

“The large drop in employment did not translate into a similar sized rise in the number of unemployed people because around 489,800 people left the labour force”, stated Bjorn Jarvis, head of labour statistics at the ABS. “This means there was a high number of people without a job who didn’t or couldn’t actively look for work or weren’t available for work”.

Also released from Asia pacific, Australia consumer inflation expectations dropped to 3.4% in May, down from 4.6%. Japan M2 rose 3.7% yoy in April versus expectation of 3.4% yoy. Japan machine tool orders dropped -48.3% yoy in April.

EUR/USD drops mildly today but stays in familiar range. Intraday bias remains neutral first. Price actions from 1.0635 are seen as a corrective pattern. On the downside, break of 1.0727 support will raise the chance that the correction is completed. Intraday bias will be turned to the downside for retesting 1.0635 low. On the upside, above 1.0895 will turn bias to the upside for 1.1019 resistance to extend the pattern. But in that case, upside should be limited by 61.8% retracement of 1.1496 to 1.0635 at 1.1167. 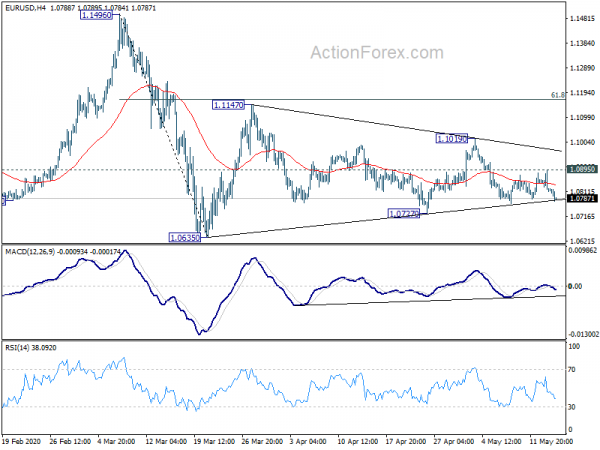 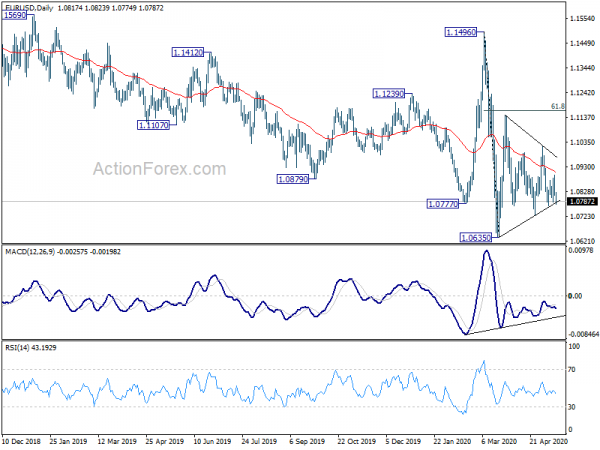