Dollar weakens notably in early US session after retail sales data showed another record decline in April. Stock futures also tumble after the news In particular, gold rides on the greenback’s selloff and it’s set to resume larger up trend. . Nevertheless, for the day, New Zealand, Australian Dollar and Sterling remain the worst performing ones. Yen, Swiss Franc, and Euro are the stronger ones,

Technically, Gold is eyeing 1747.75 resistance. Decisive break there will target 61.8% projection of 1160.17 to 1703.28 from 1451.16 at 1786.80. Some further upside acceleration could be seen if this major hurdle is overcome. Sterling’s weakness is also worth a watch as EUR/GBP is resuming recent rebound from 0.8670 resumes after brief retreat. Reactions to 0.8987 near term fibonacci resistance would reveal the underlying strength of the cross. 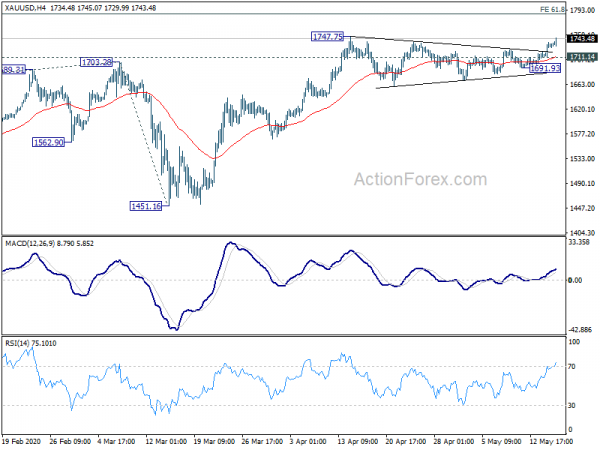 Also released, Empire State Manufacturing index rebounded sharply from -78.2 to -48.5 in May, much better than expectation of -65.0.

UK Brexit chief Brexit negotiator David Frost said “very limited progress” were made on the “most significant outstanding issues” with EU after completing the latest round of negotiations. He further warned that if EU persists in its “novel and unbalanced proposals on the so-called level playing field,” two sides won’t be able to reach an agreement.

“We very much need a change in EU approach for the next round,” Frost added. “The U.K. will continue to work hard to find an agreement, for as long as there is a constructive process in being, and continues to believe that this is possible.”

On the other hand, EU chief Brexit negotiation Michel Barnier said the third round of Brexit talks was “disappointing”. But he insisted, “We’re not going to bargain away our values for the benefit of the British economy.”

German recession expected to accelerate in Q2, but recovery began in May

Germany’s GDP shrank -2.2% qoq in Q1, slightly worse than expectation of -2.0% qoq, worst in more than a decade. Also, as Q4’s figure was revised down to -0.1% qoq, the country was already in a technical recession with two straight quarters of contraction.

The contraction is expected to accelerate in Q2, with economists forecasts a -10% decline in GDP. But Germany’s Economy Ministry sounded relatively optimistic. It said in an email statement: “The recovery began with the cautious lifting of the lockdown at the beginning of May. But this process will take a longer time due to the continuation of the corona pandemic.”

USD/JPY is extending the retreat from 107.76 temporary top and intraday bias stays neutral first. Outlook is unchanged that corrective fall from 111.71 should have completed with three waves down to 105.98. Further rise is expected as long as 105.98 support holds. On the upside, break of 107.76 will turn bias back to the upside for 109.38 resistance first. However, break of 105.98 will dampen our bullish view and bring deeper decline. 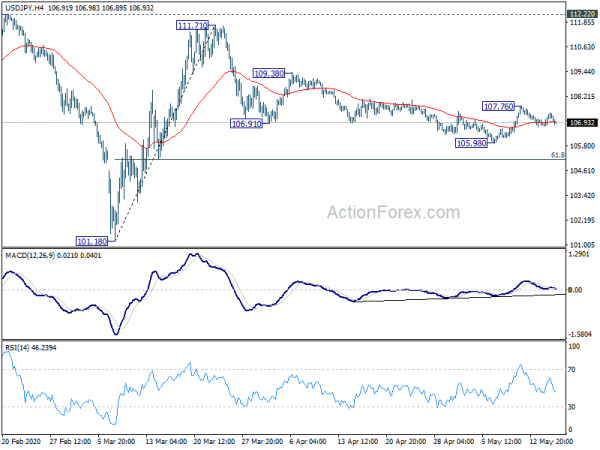 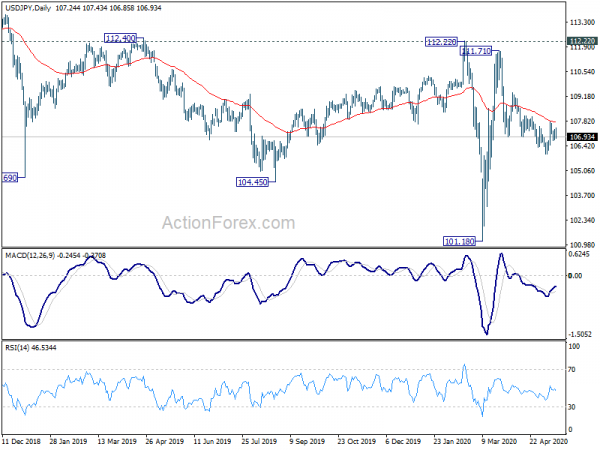