While Dollar and Yen staged notable rebound towards the end of week, they still ended as the worst performing ones. On the other hand, commodity currencies were the best performers despite paring some of the gains. Markets were lifted by optimism that the world is moving closer to lockdown exits in major countries. Also, thanks to the hard work of scientists, progress continued to be made on coronavirus vaccines. 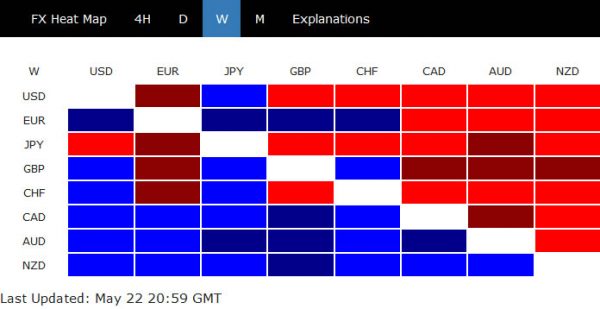 Meanwhile, diplomatic tensions between China and some developed countries intensified after it took a bold step to tighten up the grip on Hong Kong. (Here is an explainer by New York Times, coverage by BBC and Australian Financial Review on what is happening). The move drew condemnation from US Department of State, and a rare, strongly worded joint statement by UK, Australia and Canada.

The development is seen as another big step towards general cold war between the US and China, with possible escalations in trade spat between Australia and China too. At the same time, risk of Hong Kong losing its special international status as trade and financial hub is rising, which could eventually limit China’s ability to raise capital in the stock and bond markets.

The US-China-Hong Kong situation would remain a theme to watch ahead. So far, the impacts were limited to China and Hong Kong stock markets only. But spillover could happen any time, in particular if Yuan unexpectedly lose a key support level against the greenback.

We’ve talked about the head and shoulder top reversal in DOW in last weekly report. But the index quickly knocked out our bearish view on Monday with a strong gap up. It also remained resilient towards the end of the week, despite talks of re-intensification of US-China tensions. The development now suggests that rebound form 18213.65 is still in progress for 61.8% retracement of 29568.57 to 18213.65 at 25230.99. This will remain the expected development as long as 22789.62 support holds. 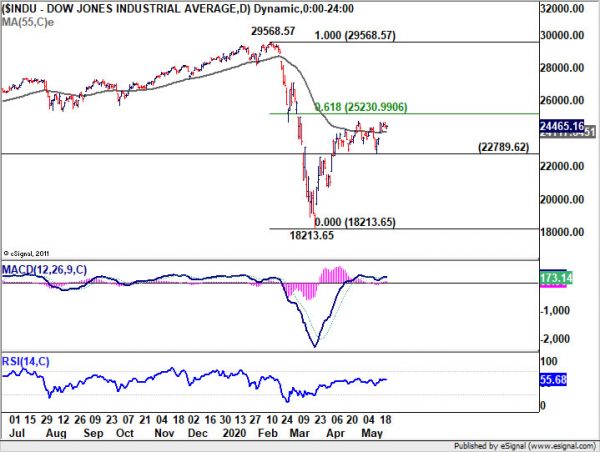 NASDAQ continued to outperform as strong rebound from 6631.42 extended. As long as 8705.26 support holds, further rise is expected in near term for 9838.37 high. But still, we’re viewing the rise from 6631.42 as the second leg of the medium term consolidation pattern from 9838.37. Even a breach of 9838.37 cannot be ruled out for now, NASDAQ should top around there to start the third leg decline. 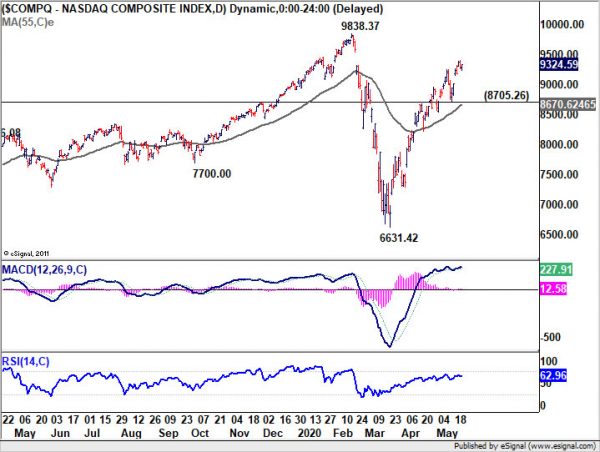 The pictures in China and Hong Kong stocks are totally different. The sharp decline in the Shanghai SSE suggests that rebound from 2646.80 has completed at 2914.28. rejection by flat 55 week EMA suggests medium term bearishness. Near term focus would be on 2759.24 support this week and break would pave the way to 2646.80 support and below. 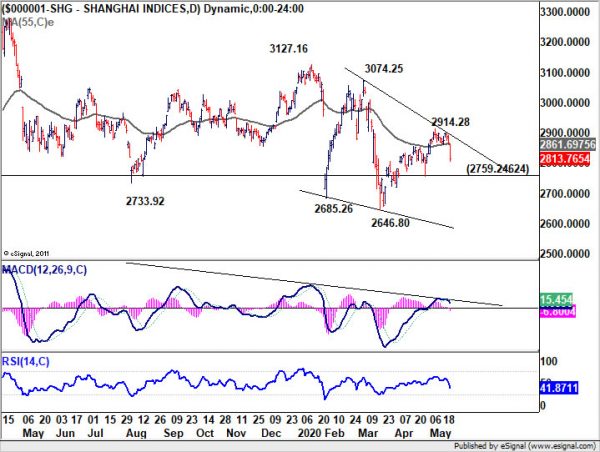 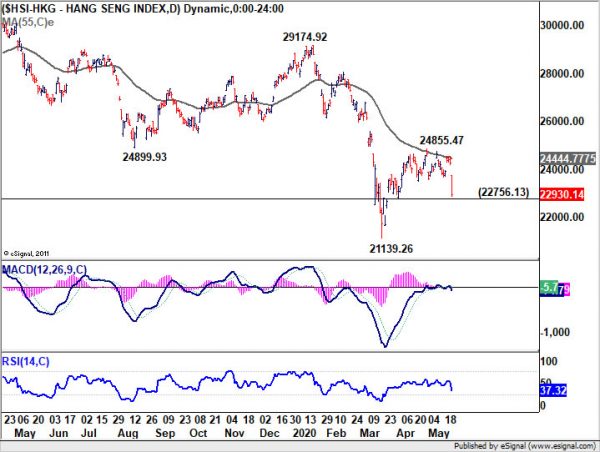 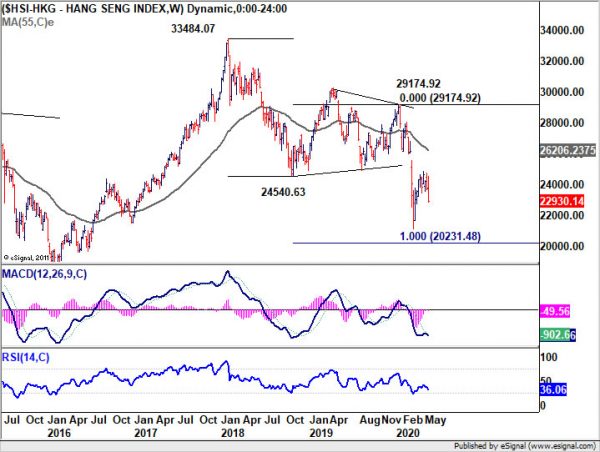 USD/CNH as an indication of US-China tensions

USD/CNH rose notably but failed to break through 7.1649 resistance so far. Also outlook is unchanged that rebound from 6.8452 is seen as the second leg of the corrective pattern from 7.1953. In case of another rise, upside should be limited by 7.1953 to bring near term reversal. Break of 7.0523 support will target 6.8452/9040 support zone. However, decisive break of 7.1953 high could imply there is significant deterioration US-China tensions. It would be an indication that bigger troubles lie ahead 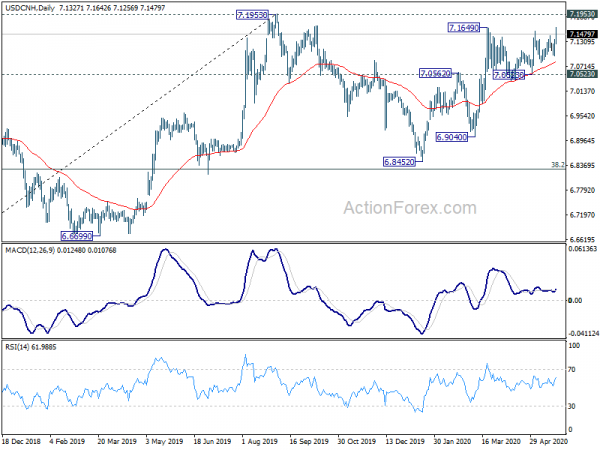 Dollar index remained directionless last week as range trading continued. Outlook is unchanged that corrective pattern from 102.99 could still extend with another leg down. But even in that case, we’d expect strong support from 61.8% retracement of 94.65 to 102.99 at 97.83 to contain downside. Meanwhile, break of 100.93 resistance should bring retest of 102.99 high. 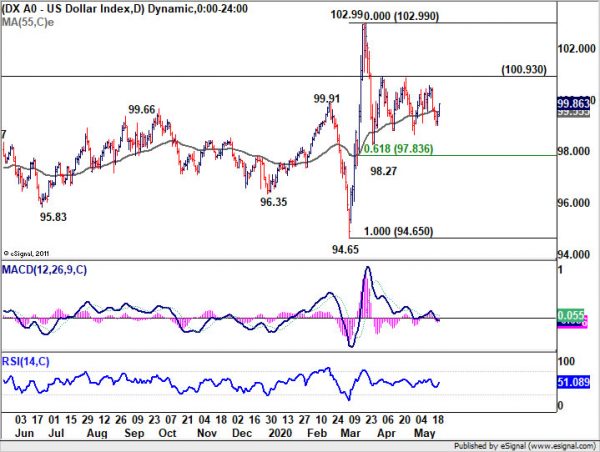 AUD/USD edged higher to 0.6616 last week as rise from 0.5506 resumed. As it retreated since then, initial bias remains neutral this week first. Overall, considering persistent bearish divergence condition in 4 hour MACD, in case of another rise, upside should be limited by 0.6670 key resistance, at least on first attempt. On the downside, break of 0.6402 support will confirm short term topping and turn bias to the downside for 38.2% retracement of 0.5506 to 0.6616 at 0.6192. 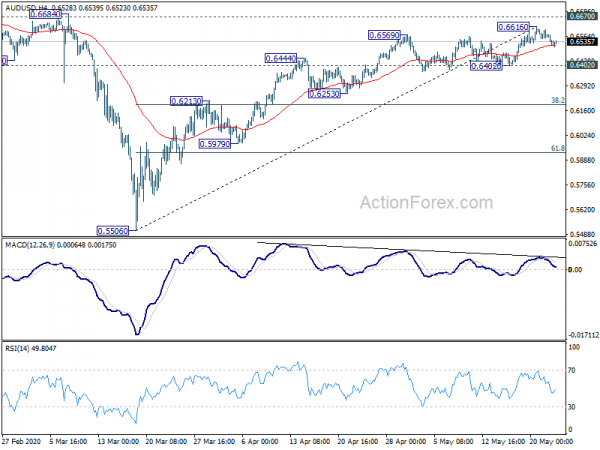 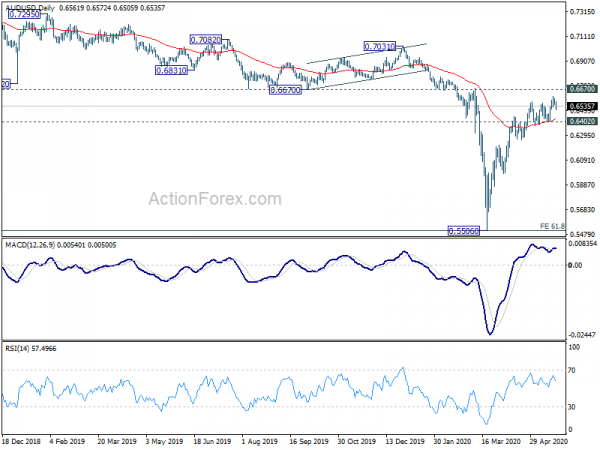 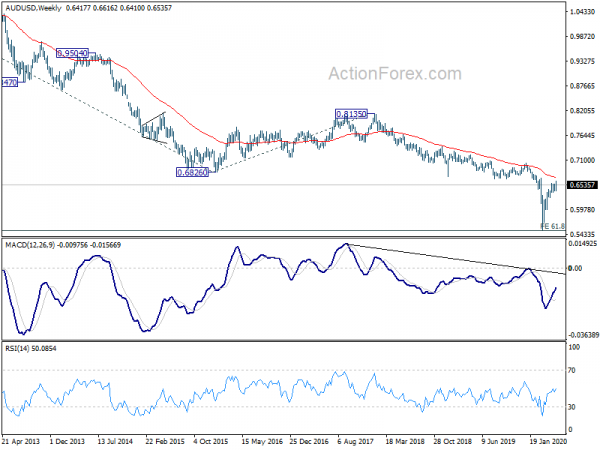 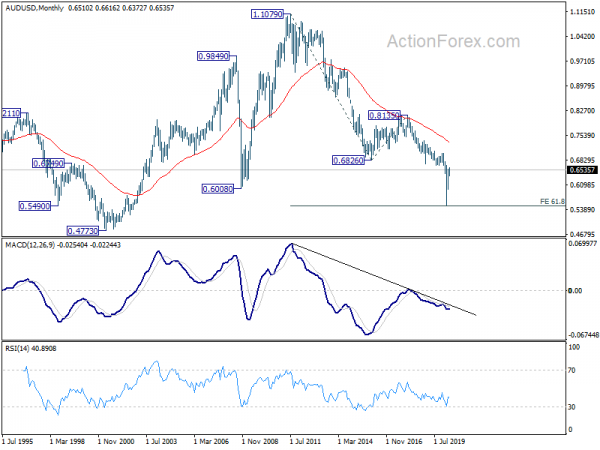