Risk-on mode continues in Asian markets today. Investors, in particular in Hong Kong markets, basically shrugged off US President Donald Trump’s announcements regarding China. There is also no reaction to the unrest in US. Instead, traders continued to cheer economy reopening, as well as positive data from China. Australian Dollar is currently the strongest for the day, followed by New Zealand. Dollar is leading the way down, followed by swiss Franc and Yen.

Technically, 1.1167 fibonacci resistance in EUR/USD is the key level to watch this week. Sustained break there could push EUR/USD further towards 1.1496 resistance. That would be an early sign of larger reversal in Dollar and could prompt steeper selloff in the greenback elsewhere. As for Aussie, AUD/JPY is now in proximity to key resistance zone between 55 week EMA (now at 72.79) and medium term trend line (now at 74.01). Reaction from there would define the next medium term move. 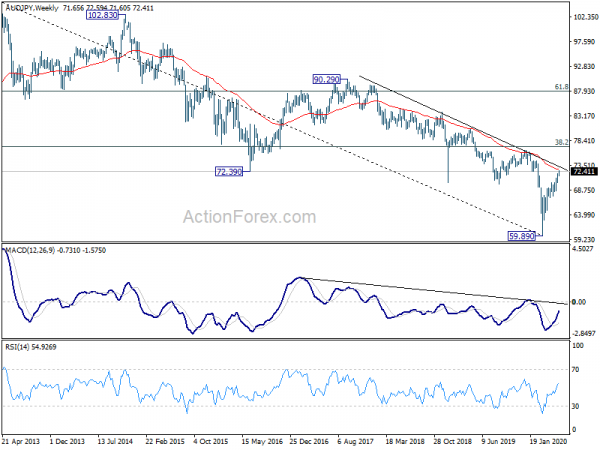 China’s Caixin PMI Manufacturing rose to 50.7 in May, up from 49.4, back in expansion territory. Markit said that “Supply was generally stronger than demand in the manufacturing sector, as production continued its expansion amid a broader economic rebound while demand had yet to recover.

Wang Zhe, Senior Economist at Caixin Insight Group added: “Sluggish exports remained a big drag on demand as the virus continued spreading overseas. Stabilizing the job market is a top priority on policymakers’ agenda this year, as shown in last month’s government work report. Boosting employment is not an easy task, as the employment subindex in the Caixin manufacturing PMI survey has remained in contractionary territory for five months in a row.”

Japan PMI Manufacturing is finalized at 38.4 in May, down from April’s 41.9, lowest since March 2009. Markit said production fell at sharper rate as coronavirus disruption continued. New orders plummeted to an extend not seen since the global financial crisis. Suppliers’ delivery times lengthened sharply once again.

Joe Hayes, Economist at IHS Markit, said: “While easing lockdown measures will be positive for the economic environment, it is clear that dislocations will remain, which will continue to hinder supply chains, impact global trade and make operating conditions challenging for manufacturers. Until we see a sustained improvement in demand, manufacturing conditions are likely to remain fragile.”

Also from released, capital spending rose 4.3% in Q1, versus expectation of -4.2% decline.

AIG noted: Exporters noted that many overseas markets have essentially shut down. They also noted higher prices for air freight into international markets that are still open to them. … Many manufacturers reported that orders from their regular customers have been delayed or cancelled altogether because of the pandemic.”

Three central banks will meet this week. RBA is generally expected to keep monetary policy unchanged. Governor Philip Lowe have made himself clear that the appropriate approach for now is wait-and-see. Indeed, Australia has been rather successful in containing the coronavirus pandemic so far. With the economy poised to phased reopening, RBA might send a more optimistic message with the statement.

BoC will also keep monetary policy unchanged. Incoming Governor Tiff Macklem will hold his first meeting, followed by a statement-only announcement. More details could be found in Deputy Governor Toni Gravelle’s economy update the following day. Gravelle’s economic assessments and tone would provide more hints on whether more easing is needed from BoC down the road to prepare for recovery in H2.

ECB officials have been preparing for the markets for a QE expansions with recent rhetorics. The Pandemic Emergency Purchase Program will likely be “expanded” this week. The key is whether the central bank would increase the size, lengthen the duration, widen the collateral, or a combination of all.

For data, US ISMs and NFP, Canada employment, Australia trade and retail sales, China PMIs, will be mostly watched.

Here are some highlights for the week

AUD/USD’s rally from 0.5506 continues today and hits as high as 0.6742 so far. Intraday bias bias remains on the upside but we’d continue to look for topping signal. Bearish divergence condition in 4 hour MACD is a sign of loss of upside momentum. AUD/USD will also face 55 week EMA (now at 0.6702) and then 0.6826 (2016 low). On the downside, break of 0.6567 minor support will indicate short term topping and turn bias back to the downside. However, any upside re-acceleration could take the pair further to 0.7031 resistance next. 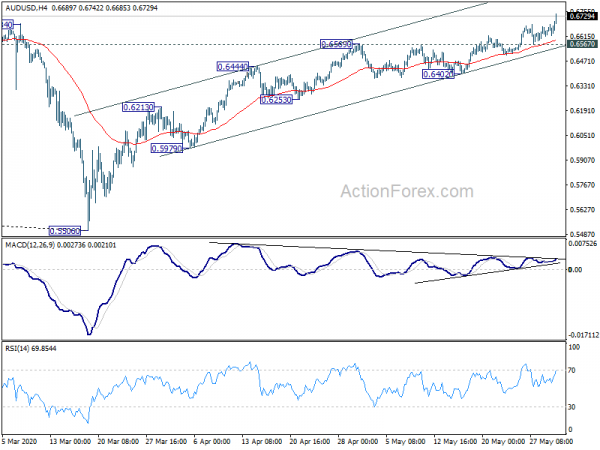 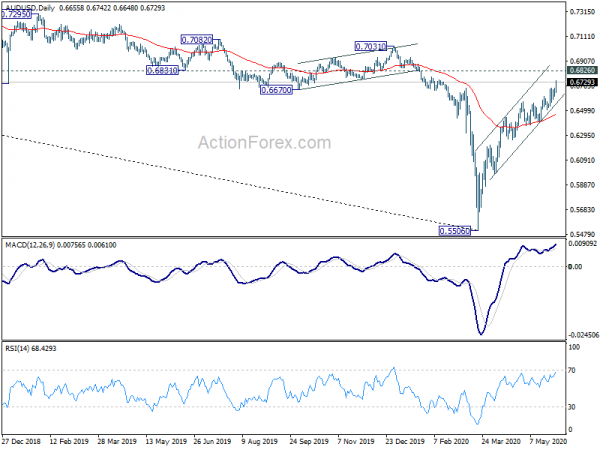