FOMC to Drive Market Sentiment in Week Ahead

A surprisingly high US inflation report for August caught traders off-guard last week, resulting in steep losses in US equity markets. The Dow Jones Industrial Average (DJIA) fell 4.13%, and the high-beta Nasdaq-100 Index (NDX) plummeted 5.77%, one of its worst losses of the year. Traders appeared rather bullish on Monday as stock prices rose, but Tuesday’s consumer price index (CPI) ended the buying.

The market moved quickly to price in a more aggressive Federal Reserve. Overnight index swaps, on Tuesday, showed a 33.9% chance for a 100-basis point rate hike at the September 22 FOMC meeting. Rate traders sold Treasuries in response, which pushed the policy-sensitive 2-year yield higher throughout the rest of the week, ending at 3.87%. That was the highest mark since October 2007.

The 10Y/2Y Treasury spread fell 18 basis points to its deepest inversion since mid-August, which stoked recession fears. US equity indexes would likely rise if traders believe the Fed is nearing the peak of its rate hiking cycle, but the chances for a sustained rally lessen as the chances for a recession rise. The chances for a global recession have risen, however. FedEx CEO Raj Subramaniam, in a CNBC interview, said, “I think so…” when asked by if the global economy is entering a recession by Jim Cramer.

The Atlanta Fed’s GDPNow estimate for the third quarter fell to 0.5% on September 15 from 1.3% on September 9. A recession would hinder margins and compress earnings across most sectors, which would weigh heavily on stock prices. The FOMC’s updated dot plot, a map that illustrates the expected rate outlook among voting members, is set for an update. Moreover, global demand faces growing pressure from rising interest rates abroad.

On Thursday, the Swiss National Bank (SNB) is expected to hike its benchmark rate by 75-basis points from -0.25% to 0.5%. The recent hike from the European Central Bank (ECB) gave the SNB some policy room to deliver an aggressive rate hike, along with high inflation and a modestly-priced Swiss Franc. The Bank of England is also set to hike rates, although at a slower pace of 50-bps. There is, however, a small chance that the BoE or SNB may deliver a larger-than-expected hike, which would likely be a negative for European stocks. The Bank of Japan, despite an extraordinarily weak Yen, is seen holding policy steady. 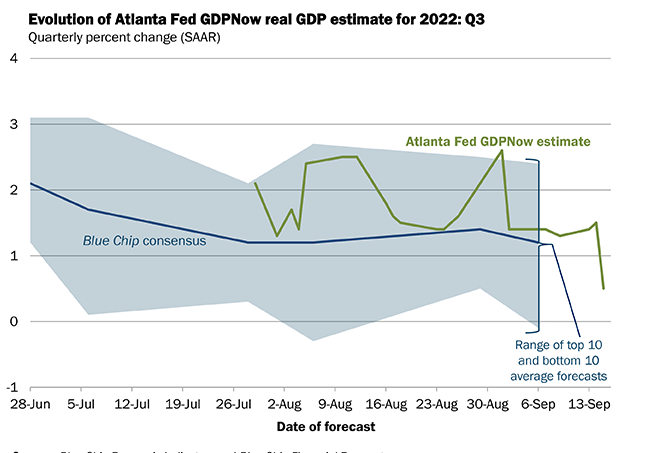 FedEx: Where now meets “a wall”