USD/CAD trades to a fresh monthly high (1.3108) after retracing the decline from the start of the week, but the exchange rate may stage another failed attempt to test the yearly high (1.3224) as the update to Canada’s Gross Domestic Product (GDP) report is anticipated to show a pickup in the growth rate.

USD/CAD extends the advance from the 200-Day SMA (1.2769) as Federal Reserve Chairman Jerome Powell warns that “restoring price stability will likely require maintaining a restrictive policy stance for some time,” and speculation surrounding the Fed’s hiking-cycle may continue to influence the exchange rate amid growing expectations for another 75bp rate hike.

Nevertheless, Canada’s GDP report may curb the recent advance in USD/CAD as the economy is expected to grow 4.4% in the second quarter of 2022 after expanding 3.1% per annum the previous period, and a positive development may sway the Bank of Canada (BoC) as the “Governing Council continues to judge that interest rates will need to rise further.”

As a result, the BoC may come under pressure to deliver another 100bp rate hike as “inflation in Canada is higher and more persistent than the Bank expected in its April Monetary Policy Report (MPR),” but signs of a slowing economy may push Governor Tiff Macklem and Co. to adjust their approach at the next meeting on September 7 as “growth is expected to slow to about 2% in the third quarter.”

In turn, a weaker-than-expected GDP report may generate a bearish reaction in the Canadian Dollar as it sparks speculation for smaller BoC rate hikes, and a further advance in USD/CAD may fuel the recent flip in retail sentiment like the behavior seen earlier this year. 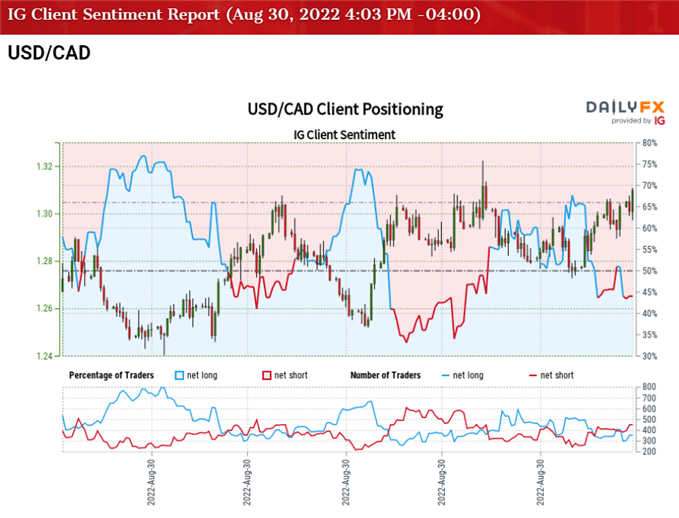 The IG Client Sentiment report shows 40.87% of traders are currently net-long USD/CAD, with the ratio of traders short to long standing at 1.45 to 1.

The number of traders net-long is 11.18% lower than yesterday and 9.85% lower from last week, while the number of traders net-short is 3.07% higher than yesterday and 10.35% higher from last week. The decline in net-long position comes as USD/CAD trades to a fresh monthly high (1.3108), while the rise in net-short interest has fueled the flip in retail sentiment as 52.97% of traders were net-long the pair last week.

With that said, a pickup in Canada’s growth rate may curb the recent advance in USD/CAD as it raises the scope for another 100bp BoC rate hike, but the exchange rate may stage further attempts to test the yearly high (1.3224) as it appears to be tracking the positive slope in the 200-Day SMA (1.2769). 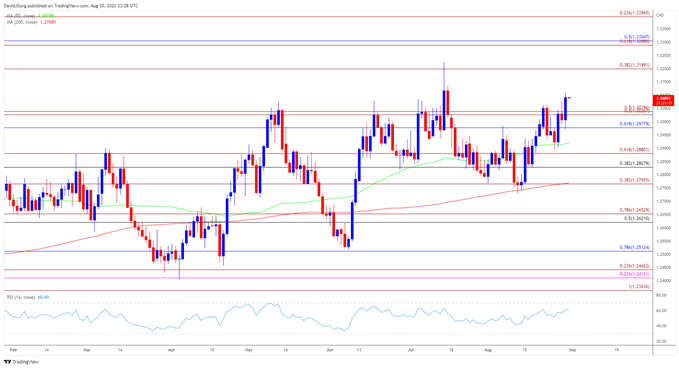 EUR/JPY slides beneath 139.00 on softer yields, upbeat Japan data ahead of EU inflation

Mildly bid around 0.6150 on upbeat China PMI, mixed NZ data ahead of US ADP, NFP

Mildly bid around 0.6150 on upbeat China PMI, mixed NZ data ahead of US ADP, NFP

XAU/USD capped by sellers aligned around $1,750

EUR/USD declines towards 1.0000 on expectation of hawkish guidance by Fed in Jackson Hole