Gold continues the longer–term downtrend with the latest drop below the August and September 2021 lows (1722). Over the medium–term however, price action has exhibited a tendency to move higher after printing the low in July which ultimately failed to break above the psychological 1800 level. With the 1800 level proving a tough nut to crack, a bearish engulfing set the tone for a continuation of the longer–term trend. last week’s bullish pullback was halted at the 50-periodsimple moving average (SMA), resulting in four days of successive down days.

There is little in terms of near–term resistanceuntil a retest of the yearly low at 1676.70 – a level that sits just above the full Fibonacciretracement of the 2020-2021 major move. However should we see any short-term fatigue in the current bearish move the 1722 level appears as resistancefollowed my 1755 add 1774.

The MACD indicator suggests that momentum is on this side of the bearish move while the RSI reveals that we do not yet trade at oversold levels.

Like gold, silver also shows a continuation of the longer–term downtrend after failing to retest the zone of resistance around 21.40 – 22.10. This presented the first signal that the bullish pullback had run out of momentum, opening up a retest of thezone of support which includes the 61.8% Fib retracement (18.69) of the 2020-2021 major move; and the 2019-2020level of resistance (18.65).

The RSI indicator reveals that current price actionis moments away from being considered ‘oversold’, which could see a near term pullback towards the zone of resistance, prior support. Play next level of support is the 16.95 level followed by the multi–year major support at 15.65. 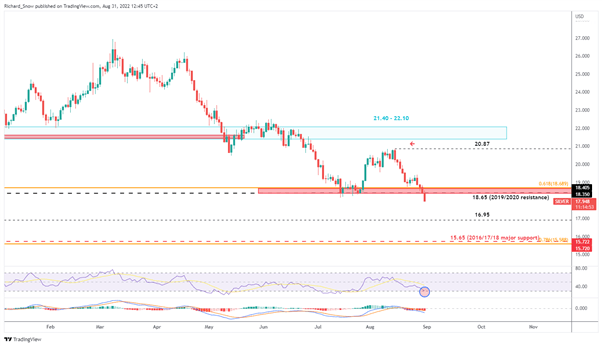 The weekly chart helps to add context to the key levels mentioned above, highlighting prior pivot points or levels that price action had previously respected. 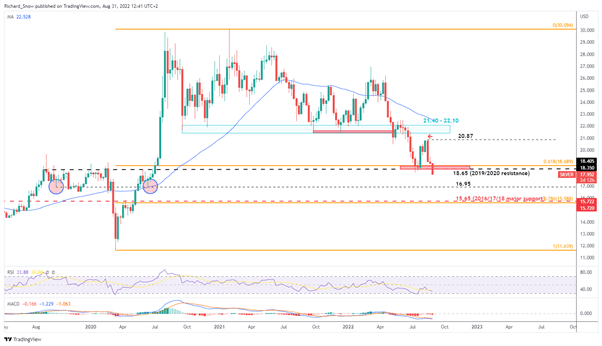 WTI crude oil continues to show a lack of discernible direction as it continues to oscillate broadly between 85 and 95. Yesterday, price action completed a bearish engulfing which appeared right below the 50 SMA, sending prices lower in the London session thus far.

Oil now tests the 61.8 Fib retracement at 88.40 with further downside challenges at 85.75, followed by the 78.6% fib retracement at 78.60. In a previous report I looked at how the RSI indicator cappedupside potential via its midpoint line ss it had shown to be a reasonable indicator of upside exhaustion during the longer-term downtrend – which failed to hold this time.

Resistance appears at 93 followed by 96.44 and the 100 dollar psychological level. 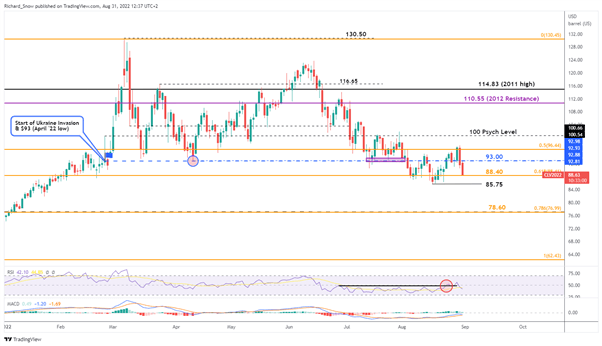 The Price Of Silver Is In a Better Position Than Gold