The Fed’s latest reassurances regarding the continued pace of rate hikes increases the likelihood of a greater divergence in US and Japanese rates, often referred to as the ‘carry trade’.

The USD/JPY currency pair emerged as a prime example of a carry trade at the end of 2021 when the possibility of interest rate hikes in the US was being considered for March 2022. Since lift-off, the Fed has raised rates from the 0%-0.25% band to 2.25%-2.5% and in doing so, created an opportunity to sell yen and buy dollars.

USD/JPY rose on Friday and continued that momentum into Monday this week and could make an attempt at a new 24 year high. The latest dollar rally and a dovishBank of Japan (BoJ) opens the door to an advance above the July and yearly high of 139.40. The MACD reveals positive upside momentum and the RSI is yet to cross into overbought territory meaning we could still see an attempt at a new high.

Resistance appears via the yearly high of 139.40, followed by the September 1998 level of 139.91. However, the pair trades lower today suggesting that USD/JPY may need to consolidate before the next push higher. Fundamentally, a new high in USD/JPY remains constructive as the Fed continues to hike rates aggressively, while the BoJ remains committed to providing a supportive monetary framework for the Japanese economy – opening up the yen to greater depreciation.

After today’s unchanged unemployment stats for Japan for the month of July (2.6%), we turn our attention to speeches from the Fed’s Barkin and Williams and another measure of US consumer confidence which is anticipated to print above the prior reading.

As for tomorrow we see retail sales data in Japan as well as a speech from the Bank of Japan Nakagawa. Speeches from Fed officials continue into the week, starting off with Loretta Mester on Wednesday and then RaphaelBostick on Thursday.

The main event for the week appears in the form of US nonfarm payroll (NFP) data on Friday where we are expecting an additional 300,000 jobs to have been added to the economy in August with the unemployment rate anticipated to remain at 3.5%. The labor market presents another potential opportunity for a revival of the ‘Fed pivot’ narrative should we see disappointing unemployment figures.

Previously, this narrative began when July CPI cooled slightly, prompting mass speculation about a slowdown in Fed tightening. Fed Chairman Jerome Powell’s address at Jackson Hole all but put any notion of slowing down to bed as he reiterated the committee’s commitment to bringing down inflation even at the expense of economic growth and a deteriorating labor market. 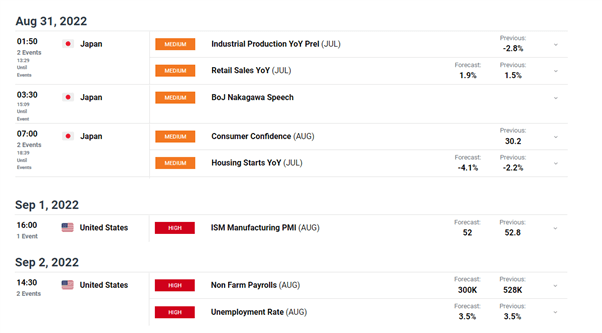 Are we running out of oil?