German inflation rose to 7.9% in August, up from 7.6%, above expectations of 7.8%. Subsequently reaffirming the case of further ECB tightening, which at present could see the central bank move towards a 75bps hike at its upcoming meeting, according to the more hawkish ECB members. As it stands, money markets are pricing in 62bps of tightening, however, while the ECB may deliver larger than usual rate hike, the bias remains lower for the Euro given the ongoing energy crisis.

A marginal bounce back in the Euro with the single currency once again reclaiming parity. While the bullish RSI divergence indicated that the bearish momentum has slowed, the bias remains the Euro being a fade on rallies. As such, near-term resistance at 1.0090-1.0110 will be closed. 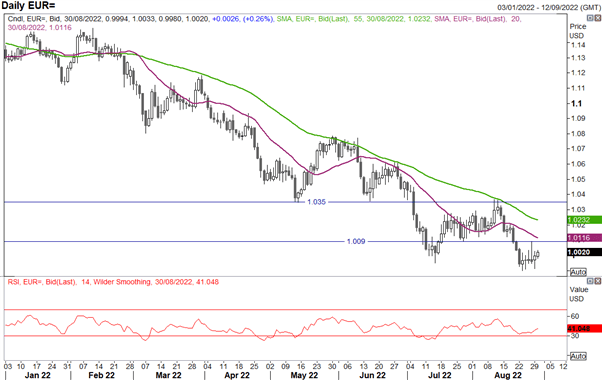 Reminder, today is month-end and thus FX rebalancing may lead to noisy price action as we head towards the 4pm London fix. At present, investment bank models signal net Euro buying, although, as mentioned above, the outlook remains bleak for the Euro given the worsening energy backdrop. As such, any price insensitive spikes in the Euro should be faded.

London WMR Fix (1600 London Time): The WMR Fix is one of the most widely used benchmarks for FX trading, taking place every day within a 5-minute window around 1600 London time. The fix provides a standard set of currency benchmark rates so that equity and bond investors can compare portfolio valuations and performance with each other.

The WMR fix tends to coincide with a sharp rise in trading volume, prompting a sizeable increase in liquidity. Occasionally, this allows for large real money flows to take place without causing too many distortions. However, flows can also be dominant in one direction (strong buying or strong selling) leading to outsized moves in a very short period of time.

The largest bout of volatility stems from the month-end fix, taking place on the last business day, where market extreme moves can often occur in the lead up during 15:00-16:00 London Time. These FX flows are derived from mostly equity rebalancing.

As such, if a UK portfolio manager holds US Dollar-denominated assets and seeks to hedge FX risk, then a monthly rise in the value of those assets will lead to more dollar hedging (selling the dollar). For example, if equities are FX hedged and US stocks (S&P 500) have risen on the month, while the FTSE 100 (UK stock market) has traded flat, then UK based investors would sell US Dollars against the Pound to add to their hedge, leading to an appreciation in GBP/USD. The greater the outperformance of US equity market over the UK would be associated with greater selling of the USD against GBP, prompting GBP to rise even higher. Although, extreme moves can often partially revert in the day following the month-end fix. That said, the occurrence of such event in a market as liquid as FX, suggests that the London fix (month-end fix in particular) is important for FX traders to watch for.

Should you be bullish on Barrick Gold (GOLD Stock)?