EUR/USD continues to hold above the December 2002 low (0.9859) as it trades within last week’s range, and fresh data prints coming out of the Euro Area may generate a rebound in the exchange rate as the Consumer Price Index (CPI) is anticipated to show higher inflation.

EUR/USD appears to be bouncing back ahead of the monthly low (0.9900) as it attempts to retrace the decline following the speech by Federal Reserve Chairman Jerome Powell, and the European Central Bank (ECB) may come under pressure to carry out a similar approach as Chief Economist Philip Lane reveals that the “upcoming September monetary policy meeting will be the start of a new phase.”

As a result, the update to the Euro Area CPI may spark speculation for larger ECB rate hikes as the core rate of inflation is expected to increase to 4.1% in August from 4.0% per annum the month prior, and evidence of rising price pressures may lead to a near-term rebound in EUR/USD as Governing Council member Lane insists that “this new phase will consist of a meeting-by-meeting (MBM) approach to setting interest rates.”

Until then, an uptick in the Euro Area CPI may keep EUR/USD above the monthly low (0.9900) as it encourages the ECB to normalize monetary policy at a faster pace, and a rebound in the exchange rate may help to alleviate the tilt in retail sentiment like the behavior seen earlier this year. 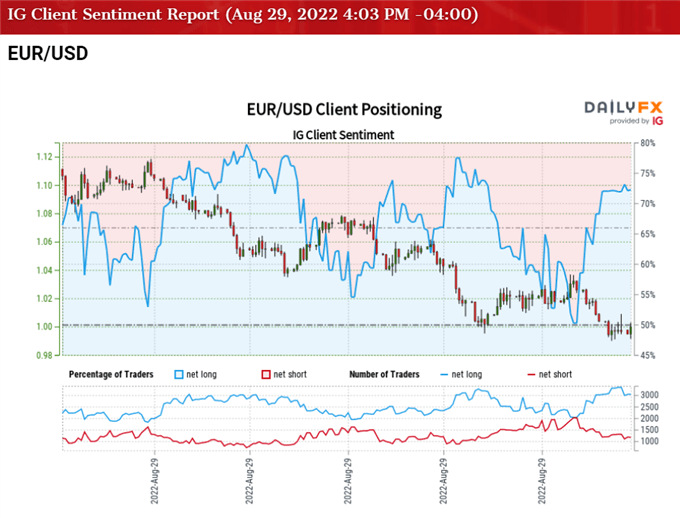 The IG Client Sentiment report shows 63.01% of traders are currently net-long EUR/USD, with the ratio of traders long to short standing at 1.70 to 1.

With that said, EUR/USD may stage a rebound over the coming days amid the failed attempt to test the December 2002 low (0.9859), but the exchange rate may continue to track the negative slope in the 50-Day SMA (1.0204) to largely mirror the price action seen in June. 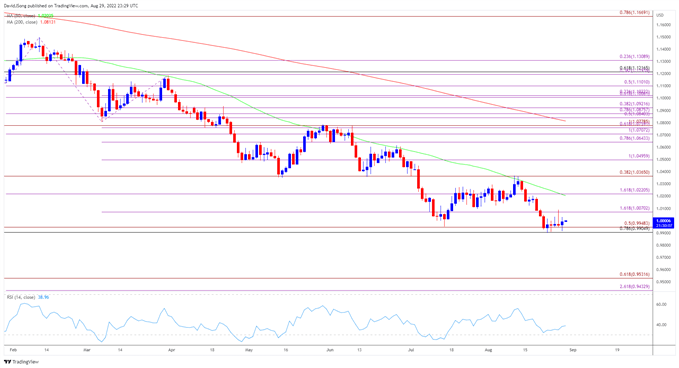 USD/CAD clings to 1.3000 as oil bulls take a breather, DXY steadies, focus on US NFP