Japanese Yen Slips Against US Dollar as Powell Confirms Hikes. Where to for USD/JPY?

The Japanese Yen depreciated in the aftermath of Federal Reserve Chair Jerome Powell outlining the hawkish stance of the central bank board on Friday. The US Dollar found broad based support on the address that was delivered at the Jackson Hole symposium.

Treasury yields ticked up as he spoke, and they have continued to climb to start this week. The interest rate differential between the US Dollar and any currency will have an impact, but it is particularly acute for USD/JPY.

The Bank of Japan (BOJ) have committed to maintaining loose monetary policy and are actively supressing the Japanese government bond (JGB) yield curve. By maintaining rates at low levels, the re-emergence of the carry trade could see further Yen weakness.

The Bank of Japan and the Peoples Bank of China (PBOC) are the only two major central banks not in a tightening part of the cycle. Forty-year peaks in inflation are the trigger for higher rates elsewhere.

On Friday, Tokyo CPI came in above expectations for August. Year-on-year core CPI was 2.6% instead of 2.5% anticipated. The Tokyo CPI number might have provided an insight into the national CPI figure that is due in 3-weeks’ time. A high number there could see the market question the resolve of the BOJ.

USD/JPY appears to be looking at testing the 24-year high of 139.39 seen in July. That level and another peak of 138.88 might offer resistance.

The 10-day Simple Moving Average (SMA)crossed above the 34- and 55-day SMAs last week to form a Golden Cross. This may suggest bullish momentum is evolving. 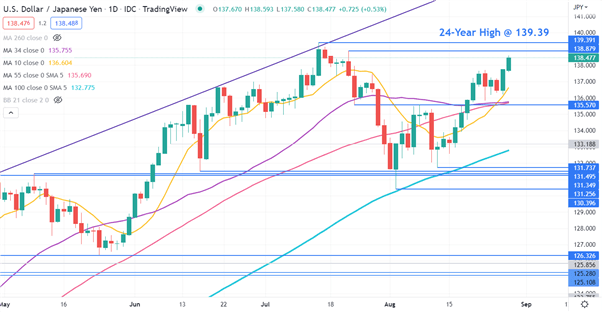 The US Is Concerned About Dwindling Access to Russian Oil

GigaFinancing Review – Is it a good choice for traders?