Countertrend traders are some of the most amazing types of forex traders. They would often get in front of a steaming trend believing that price would bounce back after they enter the market. Most would get their trades crushed by such a trend. However, some would get the precise entry right at the exact point where the market would reverse. I wonder what sort of magic these traders use to forecast such a trend reversal.

Guessing the exact points where price would reverse is very difficult. I’ve done this myself a few times, however, most of the time there would be an extra move against your trade prior to it moving in your direction.

Although it is difficult to catch countertrend trades right at the apex of the trend, it is a bit easier to spot a trend reversal based on a few clues. One of the most popular clues that traders use are divergences.

Divergences are basically price action and an oscillator indicator disagreeing with regards to the depth or height of a swing low trough or a swing high peak.

Divergences indicate a tension between the strength of a price action market swing and its corresponding oscillator. These tensions would be resolved with one of the two following the other. This often results in a strong price swing as price action reacts to such tension.

Randy CS MACD is a modified version of the classic MACD indicator which smoothens out the oscillations of its lines and automatically plots divergences whenever it detects one.

The classic Moving Average Convergence and Divergence (MACD) indicator is a popular oscillator used by many traders. It is computed based on the difference between two modified moving averages. The results are then plotted as an oscillating line on a separate window. Then, another line is derived from the original line, which is basically a moving average of the prior line. Crossovers between the two lines indicate a probable trend or momentum reversal.

Some versions of the MACD plot a histogram bar indicating the difference between the two lines. The shifting of the histogram bars over zero indicates a possible trend reversal.

Randy CS MACD simply smoothens out the oscillations of the MACD lines. It also detects divergences and plots lines connecting the swing highs or lows of price action and the peaks or troughs of the oscillator.

EMA Crossover Signal is a trend reversal signal indicator based on the crossing over of moving averages.

The EMA Crossover Signal indicator plots arrows pointing the direction of the new trend based on the crossing over of two EMA lines. Traders could then use these crossovers as an entry signal for a trend reversal setup.

Divergent MACD Forex Trading Strategy is a combination of a divergence trade setup based on the Randy CS MACD and moving average crossover setup using the EMA Crossover Signal indicator.

First, we must look for divergences between price action and the Randy CS MACD indicator. We then wait for the MACD lines to crossover signaling a probable trend reversal.

Then, on the EMA Crossover Signal indicator, we wait for an arrow to be plotted pointing the direction of the reversal.

Confluences between the two setups would be considered a valid trend reversal setup. 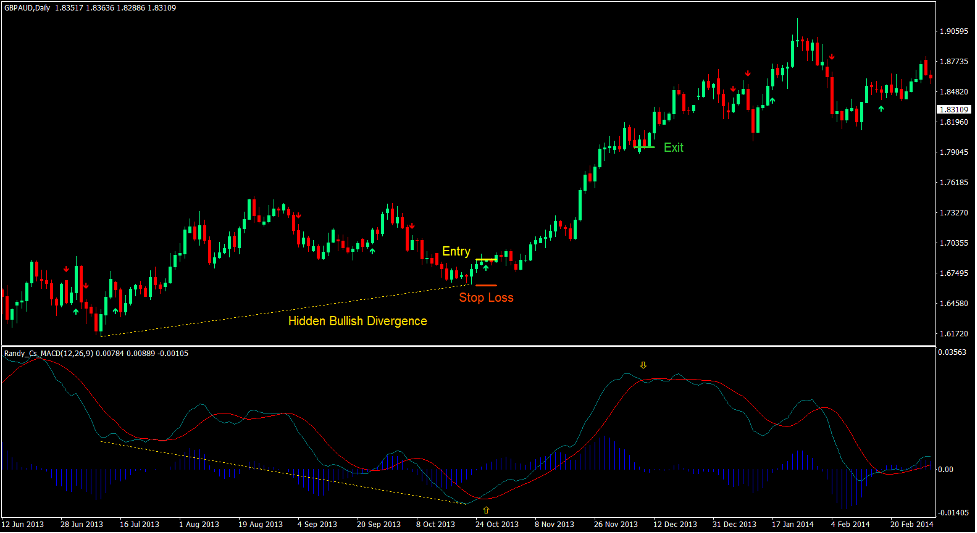 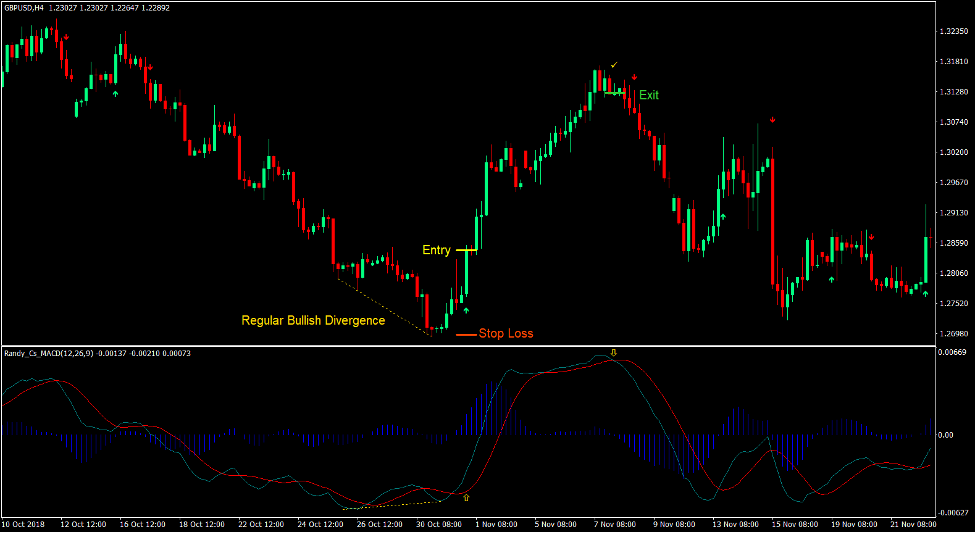 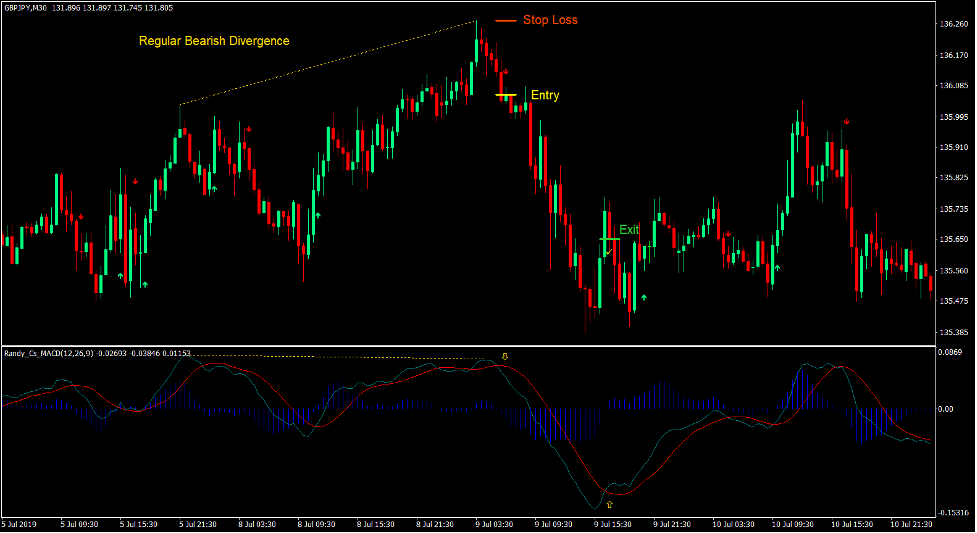 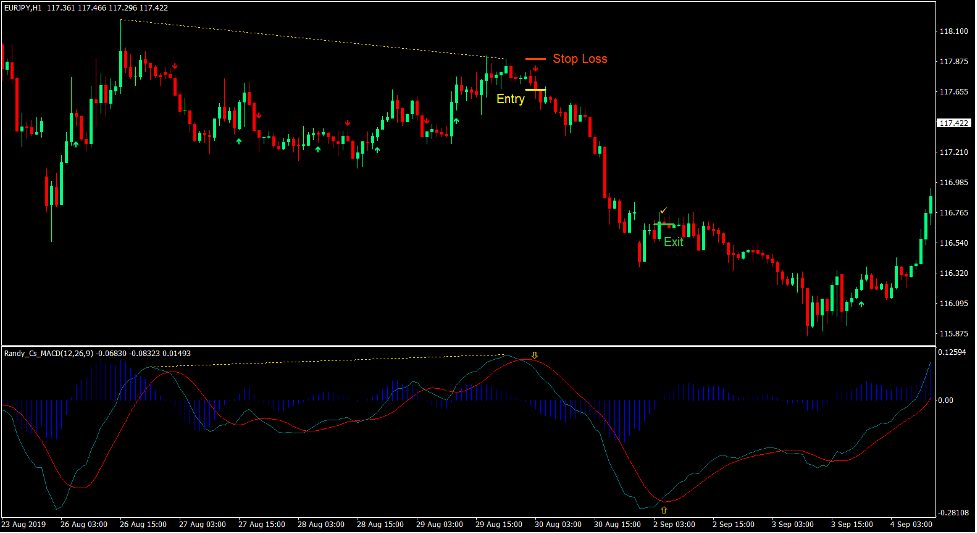 Divergences are one of the tools that many professional forex traders use. It may seem confusing at first but the longer you use it, the easier it is to find such divergence patterns.

The good thing about divergences is that it has a relatively high degree of accuracy. One professional forex trader even claims he has an accuracy of around 70% using divergences. He also claims that he seldom has more than three losing trades in a row. These figures open many opportunities for forex traders. We could use various types of hedging, which should decrease our losses further, and we could also plow back a portion of our profits to succeeding trades, which should exponentially increase our potential profits.

Divergences are great forex trading tools. In the right hands, it works magic.

The essence of this forex strategy is to transform the accumulated history data and trading signals.

Divergent MACD Forex Trading Strategy provides an opportunity to detect various peculiarities and patterns in price dynamics which are invisible to the naked eye.

Based on this information, traders can assume further price movement and adjust this strategy accordingly.

*Note: Not all forex strategies come with mq4/ex4 files. Some templates are already integrated with the MT4 Indicators from the MetaTrader Platform.

GBP/USD recovered after hitting the lowest since March 2020