Yesterday we gained further insight into the thinking of the European Central Bank’s (ECB) Governing Council during last month’s meeting where they voted to raised interest rates by 50 basis points despite talking up 25 bps in the months leading up to the decision.

The Council was united in favor of the introduction of the anti-fragmentation tool dubbed the ‘transmission protection instrument’ – which functions as additional firepower in the event of a surge in sovereign yields of the EU’s riskier member states. However, the decision to hike by 50 basis points was not unanimously accepted but, in my view, this ought not to be a hinderance in future meetings due to near double-digit inflation which adds to the risk of embedded inflationary expectations over the medium-term.

Everyone’s favorite ‘hawk’ within the Fed, James Bullard continued to advocate for much higher interest rates, favoring 3.75-4 percent by year end. Bullard agreed that the labor market is still strong, which we saw from yesterday’s better-than-expected initial jobless claims data. While the labor market remains strong, we saw a mere consolation in US GDP which was revised slightly to show a 0.6% contraction in Q2 compared to Q1, which is better than the preliminary estimate of a 0.8% contraction.

Such signs of a slowdown in growth have proven to have little to no effect on the market due to the resilient job market – allowing the Fed to push on and hike rates aggressively.

EUR/USD appeared indecisive for most of this week, waiting for the main event – Jackson Hole. The indecision appeared via extended upper and lower wicks which tends to precede significant data prints or events.

Parity remains a key level for the pair after last months brief test of the level resulted in a renewed attempt with greater momentum. However, given the ‘pseudo-Fed meeting’ later today as Powell prepares to address Jackson Hole and important PCE and consumer sentiment data, we cannot discount the role volatility may play as we end the trading week.

Increased volatility could see support (0.9900) and resistance (1.0100) come into effect today – underscoring the importance of risk management. Given so much uncertainty, it may be prudent to consider directional moves once the dust has settled as today’s risk events may not be conducive for ‘normal’ market conditions.

Remarks from Jerome Powell at 3pm (BST) are anticipated to be supportive of the dollar if he maintains the Fed’s stance that interest rates need to rise a fair amount from current levels.

However, keep in mind that there are two high importance data prints around the same time, US PCE inflation data and the University of Michigan’s consumer sentiment survey. Sentiment has rebounded higher from the 50 mark and with cheaper gasoline at the pumps, we could very well see a more optimistic outlook for the US economy.

PCE data is anticipated to print slightly lower, also benefitting form lower gasoline costs. The Fed prefers this measure of inflation to CPI, meaning a lower print here could have a similar, if not greater, effect on the dollar than the cooler CPI print earlier this month in the event markets perceive a lower print to have a material effect on lowering the degree of future rate hikes. 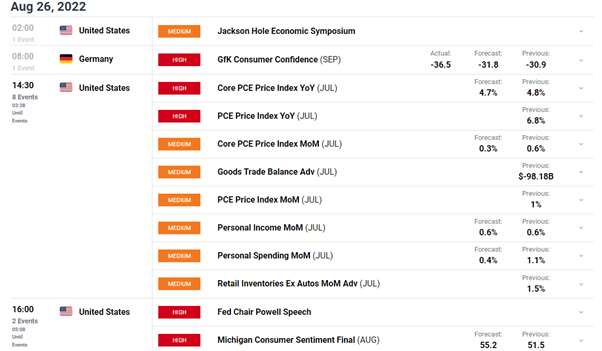 Bitcoin and Ethereum: What To Expect?