Sterling Bounce Back Less Pronounced than its Peers, GBP Vulnerable

The recent dollar weakness offered an opportunity for a countertrend reprieve among risk assets. We’ve witnessed a fairly decent pullback in the S&P 500 along with other global equities and even a number of FX pairs such as AUD/JPY and even EUR/USD to a degree. However, sterling failed to take advantage of the weaker dollar, trading only slightly higher than the recent low, underscoring thevulnerability of the pound.

On Monday this week, economists from Citibank forecast that UK inflation is likely to reach around 18%, which is significantly higher than the Bank of England’s upwardly adjusted 13.3% in October. Complicating the matter further is the fact that markets anticipate a further 160 basis point rise in interest rates compared to 127 basis points from the Fed into year end. the BoEanticipates that the UK economy will fall into recession in the fourth quarter after 2022, meaning it will essentially be hiking into an extended economic contraction.

Should initial US jobless claims trend around 250K and the Fed continue their hawkish narrative throughout the Jackson Hole event, cable remains vulnerable.

GBP/USD continues to trade around the yearly lows which formed on Tuesday. With sterling unable toclaw back losses, it stands to reason that another test of the lows remains more constructive than an advance towards 1.2000.

The economic calendar kicks off today with the start of the 3-day Jackson Hole Economic Symposium whereFedChairman, Jerome Powell is due to speak tomorrow.Many have viewed this event as a pseudo-Fed meeting and markets expect the Fed to continue their hawkish narrative, as they have in the lead up to the event.

Today we see initial jobless claims data and tomorrow we have PCE inflation data which is anticipated to be cooler than the prior figure in much the same way CPI data was cooler earlier this month. Cooler inflation suggests we may see a dip in the dollar however and continued hawkish narrative from the Fed may counter act this effect on the US dollar.

According to the latest data from the Commitments of Traders (CoT) report, large speculators (mainly hedge funds) have been withdrawing their net short positioning in the pound, as signified by the histograms. One possible interpretation of the change in sentiment is that these speculators feel the pound may be levelling out or is on track to being perceived as ‘cheap’ – which could stem further depreciation in the currency. 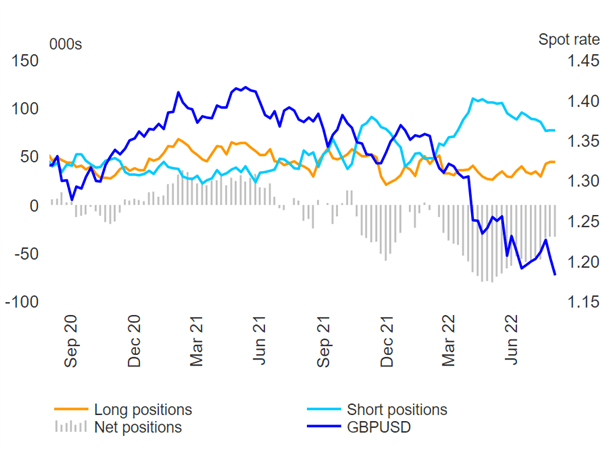 While large speculators decrease their short GBP exposure, retail traders continue to bid up the possibility of a reversal via extreme long positions in aggregate, despite a recent pick up in shorts. It’s important to note that speculators have reduce short exposure but have not yet switched to net long positioning, suggesting that retail traders are pre-empting a move ahead of time. 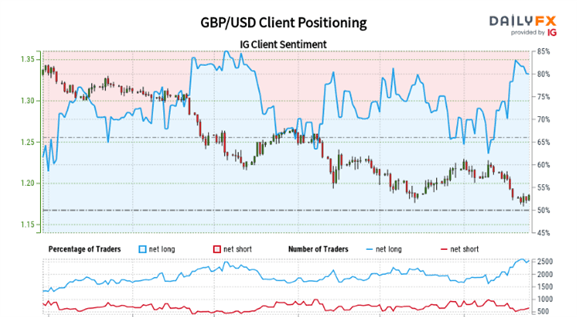 We typically take a contrarian view to crowd sentiment, and the fact traders are net-long suggests GBP/USD prices may continue to fall.

Positioning is less net-long than yesterday but more net-long from last week. The combination of current sentiment and recent changes gives us a further mixed GBP/USD trading outlook.