In this edition of Central Bank Watch, we’ll review comments and speeches made by various Federal Reserve policymakers since the July FOMC meeting. Fed policymakers have been pushing back against the notion that the rate hike cycle is finished, which isn’t much of a surprise considering financial conditions have loosened and US equity markets have rallied in recent weeks.

The tone deployed by Fed policymakers between the July FOMC meeting and the Jackson Hole Economic Policy Symposium suggests that a 75-bps rate hike is possible in September, even after Fed Chair Jerome Powell suggested that rate hikes to such a degree were less likely moving forward. But having abandoned forward guidance to embrace a data dependent stance, it may be the case that the August US inflation report (CPI) and the August US nonfarm payrolls report in September, ahead of the monthly FOMC meeting, will be the most important factors for the next tightening move.

July 27 – The FOMC raises rates by 75-bps for the second consecutive month. Cumulatively, the June and July rate hikes (totaling 150-bps) are the most since the Volcker era. The FOMC abandons forward guidance, with Fed Chair Powell signaling that future rate increases will be done on a meeting-by-meeting basis.

July 29 – Bostic (Atlanta president) says that the Fed has more to do to fight inflation, and can do so because the US economy is not “in a recession.”

July 31 – Kashkari (Minneapolis president) remarks that the Fed is “committed to bringing inflation down and we’re going to do what we need to do.”

August 2 – Mester (Cleveland president) notes that the Fed will focus on raising rates “until we get inflation under control.”

August 3 – Bullard (St. Louis president) continues to favor “front-loading” interest rate hikes as there is still “some ways to go here to get to restrictive monetary policy.”

August 4 – Mester comments that the US economy is “not in a recession” and that interest rates need to be raised further to combat inflation.

August 6 – Bowman (Fed governor) suggests that 75-bps rate hikes “should be on the table untilwe see inflation declining in a consistent,meaningful, and lasting way.”

August 7 – Daly notes that a 50-bps rate hike isn’t guaranteed for September because the Fed is “far from done” in its inflation fight.

August 9 – Bullard pushes back against the financial media narrative of a Fed pivot, saying that the Fed could hold interest rates “higher for longer” to combat inflation.

August 10 – Evans (Chicago president) remarks that the Fed “will be increasing rates the rest of thisyear and into next year to make sure inflation gets back to our2% objective.”

Kashkari pours cold water on the idea of a Fed pivot, noting “the idea that we’re going to start cutting ratesearly next year, when inflation is very likely going to be wellin excess of our target — I just think it’s unrealistic.”

August 11 – Daly notes that the July US inflation report was “significant in that they are saying that we’re seeing some improvement” but “it really behooves us to stay data dependent and not call it.”

August 17 – Bowman comments that the labor market remains strong and is “the kind of labor market that historically has pulled in more workers.”

The July FOMC meeting minutes note that more rate hikes are likely, but “participants judged that, as the stance of monetary policy tightened further, it likely would become appropriate at some point to slow the pace of policy rate increases while assessing the effects of cumulative policy adjustments on economic activity and inflation.”

What Will Powell Say at Jackson Hole?

If comments made since the July FOMC meeting are any indication, it appears that the consensus among policymakers is: (1) the US economy is not in a recession; (2) if the US economy is in a recession, it won’t stop the Fed from raising rates further to fight inflation; (3) the outcome of the September FOMC meeting – either a 50-bps or 75-bps rate hike – will be contingent upon how US data evolves over the coming weeks. If Fed Chair Powell takes a similar path during his speech on Friday at the Jackson Hole Economic Policy Symposium, it might help curb the ‘Fed pivot’ narrative that’s evolved in recent weeks, but it certainly won’t be a hawkish “whatever it takes” moment that echoes the mindset of former Fed Chair Paul Volcker.

We can measure whether a Fed rate hike is being priced-in using Eurodollar contracts by examining the difference in borrowing costs for commercial banks over a specific time horizon in the future. Chart 1 below showcases the difference in borrowing costs – the spread – for the front month/August 2022 and December 2022 contracts, in order to gauge where interest rates are headed by the end of this year.

The past several weeks have seen Fed rate hike odds rise. On August 1, there was one 25-bps rate hike priced-in through the end of 2022, with a 34% chance of a second 25-bps rate hike (50-bps in total by the end of the year). Now, 50-bps worth of rate hikes are fully discounted, with a 41% chance of a third 25-bps rate hike. Alongside a steeper 2s5s10s butterfly, the market is evidently listening to the Fed as multiple policymakers have insisted that the rate hike cycle isn’t finished. The perception of a relatively more hawkish Fed is helping undergird the US Dollar’s recent rebound. 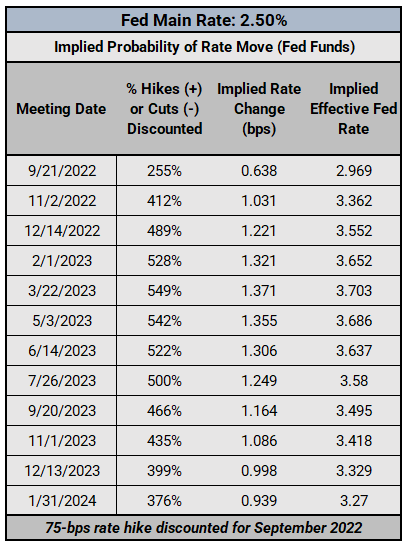 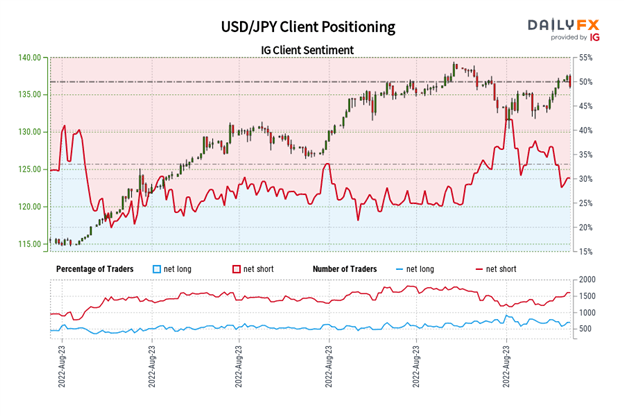 We typically take a contrarian view to crowd sentiment, and the fact traders are net-short suggests USD/JPY prices may continue to rise.

Traders are further net-short than yesterday and last week, and the combination of current sentiment and recent changes gives us a stronger USD/JPY-bullish contrarian trading bias.