The euro extended its fall this Monday as markets follow on from last weeks outlook about a hawkish Federal Reserve who could remain fervent in their path despite concerns around a recession. The inflation aspect of the argument is what many believe to be in favor of further rate hikes without inducing the U.S. economy into a recession – reiterated on Friday by the Fed’s Barkin. Should Fed Chair Jerome Powell echo these sentiments on Friday at the much awaited Jackson Hole Symposium, we could see the greenback in the drivers seat throughout the remainder of 2023.

The economic calendar today holds nothing of importance for both the U.S. and eurozone respectively but tomorrow EZ PMI’s (see economic calendar below) will grab headlines as expectations indicate yet another move lower and possible further into contractionary territory on the composite and manufacturing sides.

From a European perspective, soaring gas prices continue to weigh on the eurozone and with winter approaching, the problem is likely to worsen. The ECB has a tough task on their hands to try and juggle inflationary pressures while the weak economic backdrop shows no signs of letting up. My outlook for 2023 remains in favor of EUR/USD prices testing 1.0000 should the current influencing factors remain constant. 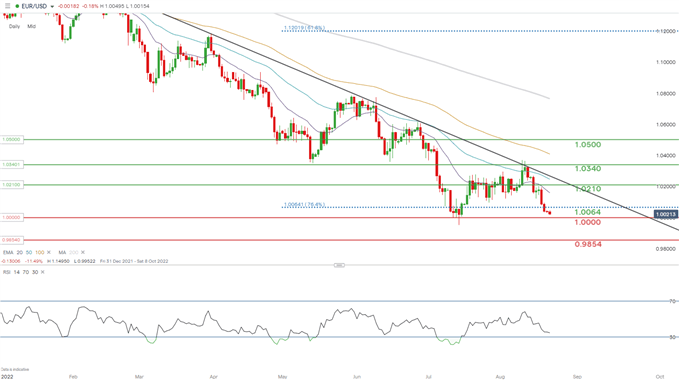 Price action on thedaily EUR/USD chart above has bears knocking at the 1.0000 support zone for the second time in this year as the pair approaches oversold territory on the Relative Strength Index (RSI). While there is still room to head into oversold territory, I think a break below parity is definitely a possibility.

IGCS shows retail traders are currently LONG on EUR/USD, with 70% of traders currently holding long positions (as of this writing). At DailyFX we typically take a contrarian view to crowd sentiment however due to recent changes in long and short positioning we arrive at a short-term cautious bias.

Down trend and Little Recovery