USD/CAD bulls have the 1.3000s back in their sights as hawks circle the Fed

USD/CAD is 0.26% higher at the time of writing, entering the midday session of the New York trade. The bulls have taken the price up to a key resistance area, with the price rallying from a low of 1.2880 reaching today’s high so far of 1.2946.

The market has been dominated by speculation around the Federal Reserve. The US dollar index hit a three-week high on Thursday as investors reevaluated Wednesday’s minutes from the July meeting as more hawkish than first interpreted. Additionally, the US data has been favourable to the bulls that will likely warrant a string of aggressive rate hikes from the central bank.

Analysts at TD Securities explained that the minutes also note ”a risk of remaining in the restrictive territory, which could imply a lean against immediate cuts even during a major slowdown.” Jackson Hole offers a venue to explore this more deeply for which markets will be tuned into on August 27 – 29.

In addition, Federal Reserve Bank of San Francisco President Mary Daly said the central bank should raise interest rates “a little” above 3% by the end of the year to cool inflation. This is on contrary to the market’s belief yesterday that officials would then reverse course.

Analysts at Rabobank argued that both Daly and the minutes of the Fed’s latest policy minutes have suggested that ”the Fed could favour a ‘raise and hold’ strategy, suggesting that rates could be higher for longer through next year and beyond relative to the levels the market has been expecting. This is not good news for equity bulls; however, it is supportive for the medium-term outlook for the USD.”

Another factor supporting the greenback for its safe haven qualities comes with the potential for more geopolitical chaos, including further weaponization of supply chains, as analysts at TD Securities noted that tests the mettle of risk seekers. ”This should reinforce nascent correlations that show G10FX very positively correlated with global equities, adding to further USD resilience that supports our EUR/USD short and bias to leg into USD/CAD topside around the Bank of Canada’s decision.”

As per the prior series of technical analysis, USD/CAD Price Analysis: Bulls eye 1.3000 for the sessions ahead, the bulls move din on the resistance that is guarding the 1.3000 psychological area as the following prior analysis and update illustrates:

As shown, the price followed the projected price trajectory and is embarking on a break of prior highs for a path to the higher 1.3000 targets: 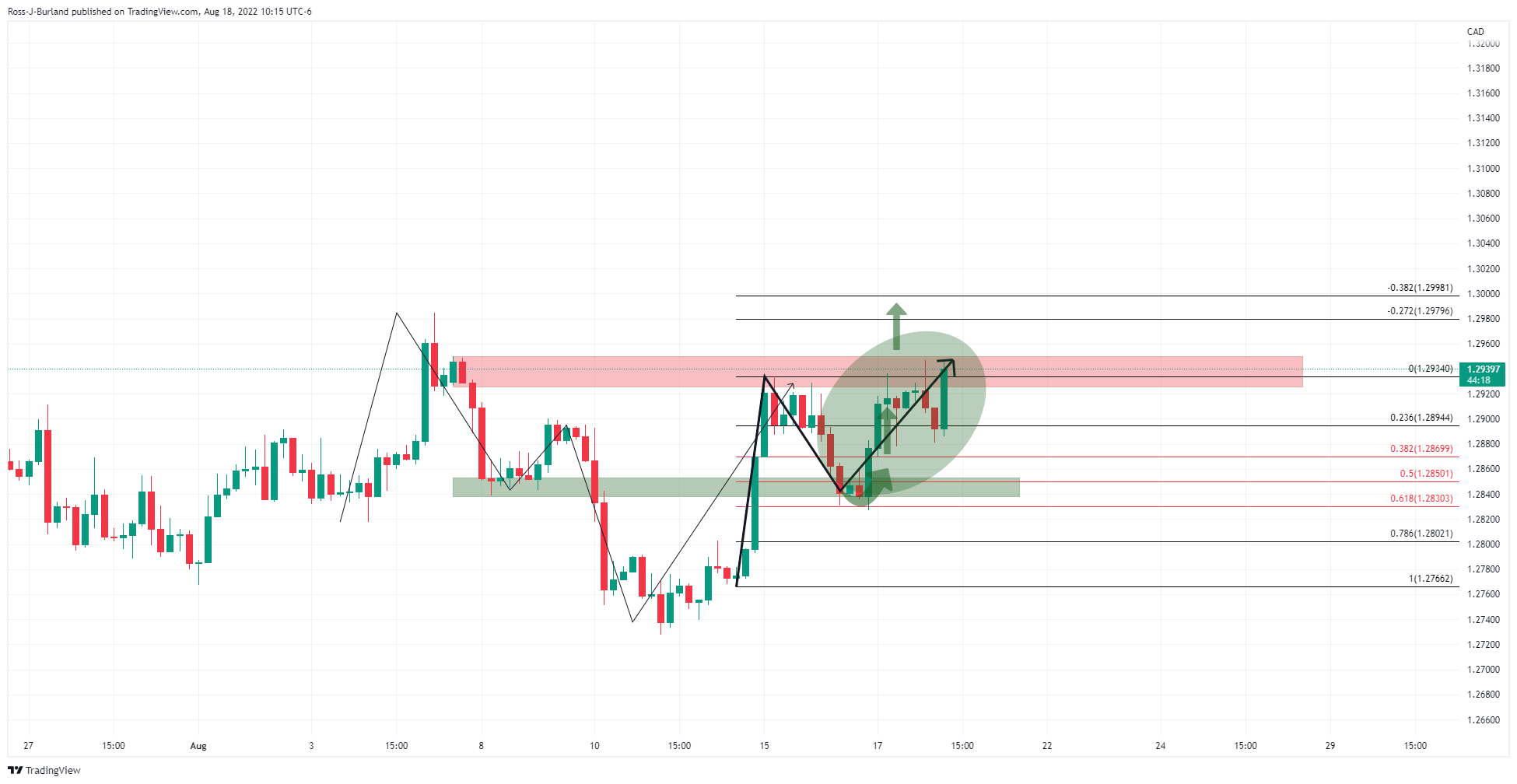 The Dollar Was on The Offensive