What are The Best NFT Memes of All Time

Have you ever thought about the best NFT memes of all time? Why does it seem that every crypto enthusiast adores searching for funny NFT memes online whenever they have a chance to do so? First of all, it is not a big surprise why many tech individuals in the crypto community have got crazy about the famous Non-Fungible Tokens.

Since the Axie Infinity NFT project, based on a video game, became extremely popular and sold worldwide, the demand for these tokens skyrocketed. In the last two, three years, we have witnessed a major interest in NFTs from crypto maniacs and beginners who want to invest in this digital artwork.

However, those who are really into NFTs adore looking at various interesting NFT memes that depict real situations in the NFT market. Still, they are presented in an extremely funny way.

But before we give you the answer on what are the best NFT memes of all time, we’d like to explain what NFTs mean in general.

What are NFTs exactly, and why have they become so popular?

NFT is short for Non-Fungible Token. It refers to financial security that consists of digital data such as photos, videos, audio, memes, tweets, GIFs, and other types. These data are stored in Blockchain technology, which is a form of a distributed ledger.

The ownership of a Non-Fungible Token is recorded in the Blockchain and can be transferred by the owner. That transfer allows non-fungible tokens to be traded and sold, as well. Anybody can create their unique non-fungible Token since it doesn’t require coding skills.

Since Non-Fungible Tokens are authentically identifiable assets, they are different from other cryptocurrencies such as Ethereum and Bitcoin, which are fungible. NFTs provide proof of ownership and a public certificate of authenticity. However, the legal rights conveyed by an NFT could be uncertain.

Remember that there is no inherent legal meaning, and it doesn’t require intellectual property rights, copyright, or other legal rights conveyed over its associated digital file.

The reason for NFT’s massive popularity

The whole crypto community got crazy about NFT and NFT memes, in general, because they are considered to provide individuals with a way to create authentic digital assets that represent ownership of digital and tangible world assets.

What does it mean exactly? In short, you are able to create an NFT that represents ownership of land, house, or even a pair of shoes and then store the tokens on the Blockchain such as Cardano or Ethereum.

These Non-Fungible Tokens became the center of attention in the crypto universe because their value can reach tens of millions of US dollars. Perhaps the most popular form of Non-Fungible Tokens is digital artwork ranging from videos, photos, audio files, and game assets to digital paintings and GIFs.

In the past couple of years, these Non-Fungible tokens grew from a not-so-popular niche Internet fad into, perhaps, the hottest current pop culture phenomenon. Even though not everybody quite understands NFTs in general, numerous individual artists and collectors from all over the world did not stop selling them.

Generally speaking, NFT enthusiasts are willing to buy just about anything as a Non-Fungible Token, hoping the asset will be worth something. This drives price speculation and can eventually lead to a crash.

So, what about NFT memes? What is the story behind these funny digital representations of situations?

What are the best NFT memes so far?

Now that you’ve become familiar with the NFT meaning and the reason for their immense popularity, it is time to get to know the best NFT memes that the Internet has spawned.

This funny NFT meme represents the situation of an NFT enthusiast who probably spends too much time minting non-fungible tokens. For these enthusiasts, it seems much easier to make new friends in the Metaverse than in real life. It’s a sad, true story for many cryptos and NFT lovers who are antisocial yet can find genuine connections in their online communities.

#2 The Wolf of Wall Street on NFTs

This funny meme is made from one of the most quoted scenes from The Wolf of Wall Street in 2011. It alludes to how easy it is to sell anything NFT to a passionate collector as long as it’s “anything” in NFT form. Even when it is an ordinary ballpoint pen, if it is known as an NFT, it will be sold at a five times higher price than otherwise. 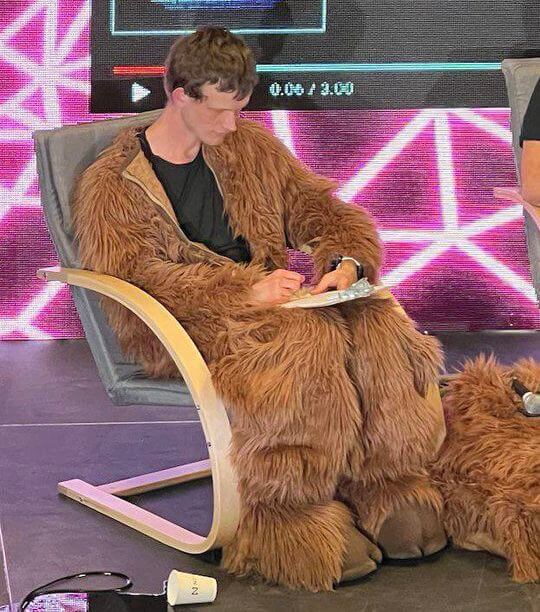 Everyone who has contact with NFT knows that the key social network for any project is Twitter. So, for any quality NFT meme, Twitter is the right place to find it. In the attached funny NFT meme, we see Vitalik Buterin, the founder of Ethereum, sitting in a bear costume and pensively writing something in his notebook.

#4 Lord of The Rings NFT Meme

In this funny NFT Lord of the Rings meme, we see Frodo explaining to Gollum how he can get into possession of his precious and how NFTs function. Of course, his facial expression and the whole situation look so funny since Gollum represents numerous newbies in the NFT universe, trying to understand how it all works.

Besides all that, there are a lot of LOTR fans in the crypto and NFT community that will adore this type of content, for sure!

Among the best NFT memes so far, there is also a “Pet-Rock” meme representing a very common situation with numerous NFT enthusiasts. Before the Internet, people in their 30s were mostly married, considering investing in their new house, thinking about starting their own family, and so on. Nowadays, all they’re thinking about is investing in NFTs.

In this comic situation, we can see one NFT single guy considering purchasing an NFT pet rock for an insane amount of US dollars. And what is the funniest is that this scenario is mostly accurate in real life for many NFT devotees.

The madness and demand for NFTs can sometimes really be best illustrated through funny NFT memes. One of them is this one showing panicked parents who “can’t find them.” The panicked mother shouts this line, alluding to their children, while the terrified father thinks she meant his NFTs. Is it necessary to write more of the same about this? It’s obvious how obsessed people are with their Non-Fungible Tokens these days, isn’t it?

For all history and NFT lovers, here is an interesting NFT meme that will bring a smile to your face. It is a Trojan horse that alludes to the hidden intention of a person who will suddenly introduce NFTs to their friends, who have no idea about the world of non-fungible tokens, and talk about them during their “Normal conversation.”

This meme is especially funny if you’re an NFT freak and have many friends who do not share the same passion as you and persistently try to change that.

Here’s another funny NFT meme depicting an NFT freak persistently trying to explain the meaning and value of Non-Fungible Tokens to others, which they cannot understand. Not to mention that the time and place are completely wrong for that kind of speech.

To buy NFT, you need to have a Digital Wallet installed and have ETH in it. Considering that Gas Fees can be huge, it’s no wonder this meme is considered one of the best NFT memes today. Sometimes you need the fortune to own the desired Non-Fungible Token, right?

While searching for the best NFT memes, it’s almost impossible that you haven’t come across Kevin, the unfinished Pixelmon NFT meme. This particular meme was born during the Pixelmon reveal. This project is about the art that “was not fully ready” that managed to make more than $70 million via Dutch auction sale of unrevealed NFTs.

The big mistake was that the team apparently fast-tracked the reveal without finishing NFT to look as it should be, and that is how Kevin was born. The creator of Pixelmon, Syber, said they were under pressure to push the reveal and were not ready to push the artwork, which let numerous NFT enthusiasts down with Kevin’s reveal.

The Internet is able to be an extremely fun place that can make you laugh if you know what to Google. As a passionate NFT lover and collector, you must have enjoyed these best NFT memes we have prepared for you.

However, this is only a fraction of what is out there and what you will come across as you search through all the riches that the NFT community throws online daily.

EUR/USD Stuck in Horizontal Channel, but US NFP Data Could Catalyze a Breakout

EUR/USD Stuck in Horizontal Channel, but US NFP Data Could Catalyze a Breakout

What Is HEX Crypto and Where Can You Buy It?

Euro Caught in the Range as US Dollar Sidelined Ahead of CPI. Will EUR/USD Break Out?