What is Earnings Season & What to Look for in Earnings Reports

German factory orders performed better than expected in June, falling 0.4% on the month rather than the 0.8% expected in a month overshadowed by a growing energy crisis. Dampening the mood ever so slightly was a warning from recently bailed out German Utility provider Uniper SE that it may have to cut output at two key coal-fired power plants in Germany as the company struggles to get fuel supplies along the Rhine River. This development is exacerbating an energy crunch that has threatened to push the continent’s largest economies into recession. Water levels on the Rhine have fallen so low that the river may effectively close soon. After the news broke German power prices for next year jumped to record levels of 410.57 Euros per megawatt-hour on the European Energy Exchange.

Corporate earnings continue to provide a boost to markets with two of Europe’s biggest clothing companies rising in early trade on Thursday as their quarterly reports avoided fresh disappointments after recent profit warnings.Adidas AG (ADSGN) stock rose 2.4% in Frankfurt after the sports apparel giant reported a 4% rise in sales in the second quarter, even after adjusting for the euro‘s slide during the period. Online fashion powerhouse Zalando (ZALG) rose 9.1%, the best performer in the index, after it forecast an improvement in sales and profitability in the second half of the year after a stagnant first half.Both companies had lowered their guidance for the full year in the last couple of weeks, Adidas citing headwinds in China, the loss of sales in Russia, and lingering effects from the closure of its factories in Vietnam last year, which left it unable to meet resurgent demand in the key North American market.Adidas said on Thursday that a strong performance in North and South America, as well as Europe, the Middle East, and Africa, had helped to offset problems in China, where sales were down 35% on the year. Sales in North America rose 21% and sales in EMEA, excluding Russia, were up 13%.

For all market-moving economic releases and events, see the DailyFX Calendar 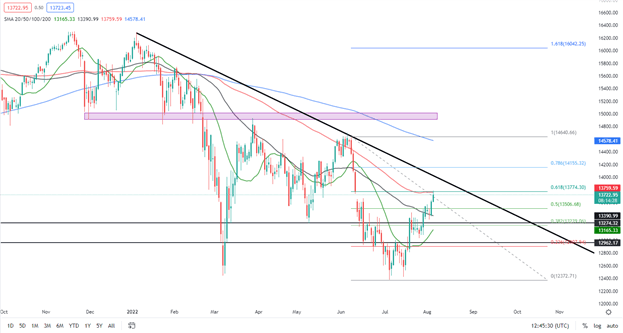 From a technical perspective, last week Friday saw a monthly candle close as a bullish candle of a level of support. We closed above the 50-SMA while at the same time maintaining a bullish structure (higher highs and higher lows) on the monthly timeframe. The daily timeframe saw a bullish engulfing candlestick close yesterday as we engulfed the previous three daily candlesticks. Having pushed higher off the 50-SMA we have found resistance and a slight pullback as we tapped the 100-SMA which coincides with the 61.8% fib level. Caution ahead as we have many confluences providing resistance between the 13750 area and psychological 14000 level which lines up with the daily trendline. 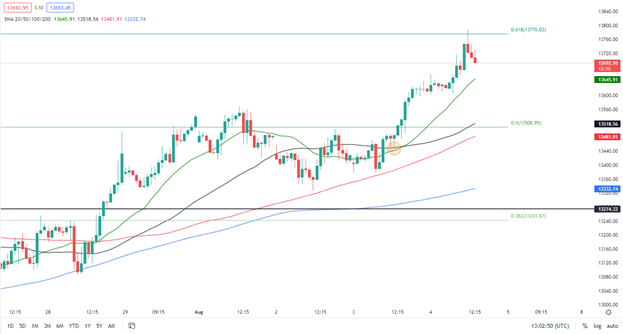 The 1H chart has seen a nice move higher following yesterday’s tweezer bottom candlestick formation of the 50-SMA (circled on the chart) giving us that 330 point rally from 13450 to today’s high of 13788. We printed a shooting star candlestick on the 1H chart at the 61.8% fib level drawn on the daily timeframe. There is a probability of a pullback here, however we do have better confluences for would be sellers should the price make its way higher.

Key intraday levels that are worth watching:

How to Find Altcoins Before They Spike?

The party ends as AMTD Digital (HKD) stock drops below $900

The party ends as AMTD Digital (HKD) stock drops below $900