OPEC+ will convene today for the 31st OPEC and non-OPEC ministerial meeting. The focus will be on a new strategy, now that they are (on paper) producing oil at pre-Covid levels. Heading into the meeting, there has been greater pressure on Saudi Arabia to convince OPEC+ members to boost production following US President Biden’s meeting with the Saudi Crown Prince, in which the President stated after the meeting that he expected Saudi Arabia to take further steps to raise oil supply.

However, as had been shown in the latest Reuters survey, OPEC production remains notably below current quotas, around 1.3mbpd. Combine this with the fact that spare capacity is limited for the major oil producers, alongside slower economic growth expected within the next year. It appears to be a tall order in expecting a production increase from OPEC+. This sentiment has been echoed by OPEC sources, noting that they see very little chance for an oil output at today’s meeting. On the flip side, the Kazakhstan Energy Minister did point out that current prices of $100/bbl are above the preferred range of $60-80/bbl and thus production may need to be raised.

That said, should OPEC+ members fail to agree on a production hike, oil prices are likely to increase, boosting oil-sensitive currencies, such as CAD and NOK. Meanwhile, with oil prices pulling back as we head towards the decision, there is an argument that a production hike is being somewhat priced in by the market. Therefore, outside of a knee-jerk move lower on a decision to boost oil supply, follow through is likely to depend on risk sentiment.

During OPEC decision days, it is not uncommon for a plethora of source reports to do the rounds across newswires as well as on social media with #OOTT on Twitter being the primary location for oil commentary. Therefore, it will be important to follow OPEC watchers on Twitter, such as Amena Bakr and Javier Blas who are invaluable during these OPEC meetings.

On the technical front, near-term support is situated at the 200DMA ($98.46), which Brent crude has not closed below since December 2021. At the same time, a level that the asset also has not closed below is $97.50, marking the level at which the Russian invasion of Ukraine began. As such, key technical damage will be done should we see a close below $97.50, opening the doors towards a $90 handle. Meanwhile, on the topside, resistance is situated at $104.43 (weekly high) and $107. 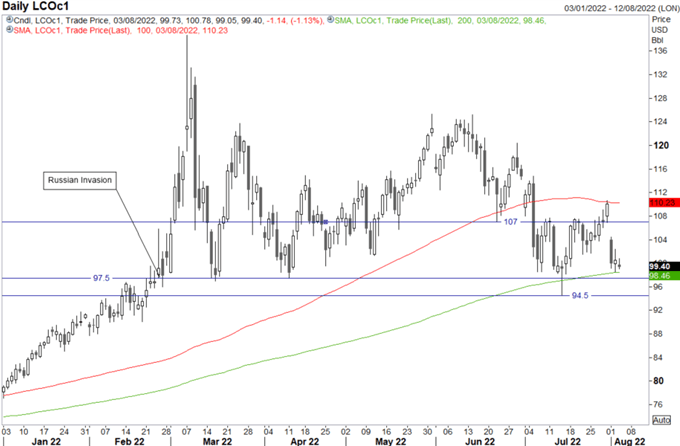 USD/JPY struggles for a firm direction, remains confined in range around 135.00 mark